How to Get Your Music on Discover Weekly & Release Radar 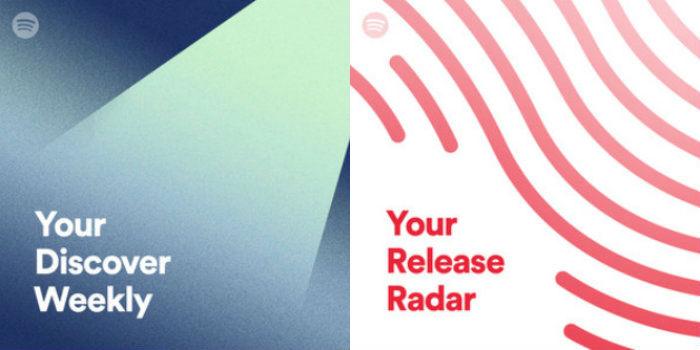 "Musicians often focus on making it onto curated playlists, whether that’s Spotify’s own weekly compilations like New Music Mondays or alternative playlists built by independent users. However, if your aim is to gain more streams, getting on algorithmic playlists like Discover Weekly and Release Radar can be much more effective.

Spotify UK’s director of artists and management is on record saying that Release Radar alone generates more streams than any of Spotify’s self-curated playlists. But why? And how can artists start to take advantage of this and get on Spotify playlists like these?

Before we delve into Release Radar and Discover Weekly individually, here are a couple of pieces of advice that apply to getting on both of these algorithm-based playlists:

It stands to reason that the more music you release, the more chances you have when it comes to landing on Spotify users’ Discover Weekly or Release Radar playlists. However, quality is more important than quantity, so if your output is high, make sure the standard of each release is high too.

Focussing completely on Spotify is an all-too-common mistake. If you become fixated on Spotify playlists, you’ll miss out on other promotional opportunities, including live shows, social media ads and email marketing for musicians, which all have their specific benefits and can positively affect your performance on Spotify in their own way.

It’s also important to understand how Release Radar and Discover Weekly work. Then we can explore how to get your music featured.

HOW TO GET MUSIC ON SPOTIFY DISCOVER WEEKLY

Each Spotify user receives their own unique Discover Weekly playlist every Monday morning.

This playlist is based entirely on that specific user's music tastes, and is not put together by Spotify’s editorial staff, but instead by a clever algorithm which analyses individual listening habits and spits out similar songs that a certain user may not have heard before.

So how can you increase the chances of your music being included in a potential fan's Discover Weekly?

GET ADDED TO OTHER PLAYLISTS

Spotify bases it’s Discover Weekly selections heavily around other playlists across the platform. That’s doesn’t just mean playlists with a million followers. It uses data across every playlist to determine tastes, artists similarities and what other listeners might enjoy, whether that’s a playlist with thousands of daily listeners, a user’s private playlist, or a public list with just a few followers. They all count.

+How Can I Get on Spotify Playlists?

This quote comes directly from a Spotify exec and offers a simple explanation of how Discover Weekly is compiled:

"We look at what you've been listening to. And what are the songs playing around these songs that you've been jamming on, but that we know you haven’t heard yet on Spotify."

"Let's say you've been playing a song by The Killers and a song by Bruce Springsteen a lot. Algorithms look for how those songs are played and ordered in other Spotify users' playlists. If it turns out that, when people play those songs together in their playlists, there’s another song sandwiched between them that someone has never heard before, that song will show up in your Discover Weekly."

Let’s get this one out of the way. If your music sucks, you’ll have high skip-rates and low listener engagement/retention and you won’t get picked up by Discover Weekly.

On the other hand, it's not all about how many streams you have. Generally a track with at least 20,000 streams has a good chance of making the cut, but more important metrics from the Spotify algorithm’s point of view include the proportion of your tracks that are listened to all the way through, how many people save it, add it to their own playlists and share it on socials etc. This kind of engagement is key.

HOW TO GET MUSIC ON SPOTIFY RELEASE RADAR

Although Release Radar is still based on an algorithm, it’s a little less complex when it comes to understanding how and why music is included. Just like Discover Weekly, every weekly Release Radar playlist is unique to each user. But rather than bringing up artists the user has yet to discover, it provides up to two hours’ worth of new releases from the artists they already follow or listen to regularly. Here's how to land on this playlist.

Your music will generally only appear on the Release Radar playlists of the people who follow your artist profile, so if you want to make sure they know about your latest track, ask them to follow you, rather than simply passively listening to your music on Spotify.

Once you build up a good following, every time you release new music those fans will be notified via this playlist.

If you’ve just released a new track, make sure to heavily incorporate Spotify into your promotional efforts. For example, post links to your music on Spotify to social media and ask any blogs that feature your tracks to embed them from Spotify. The more fans landing on your Spotify songs from “off-platform”, the better.

Spotify’s algorithm-based playlists like Release Radar and Discover Weekley don’t just generate millions of streams for artists – they generate BILLIONS. Music fans tend to check these playlists first when searching for fresh music based on their specific tastes, or for a new track from their favourite artists - so don’t underestimate their promotional power!

Have you had success with any of these tips? Or do you have your own advice for fellow musicians? Let us know in the comments below."

+This Spotify Payment Prediction Should Not Surprise You