How To Spot A Fake Spotify Playlist

**Guest post by One Submit, the ultimate music submission platform. 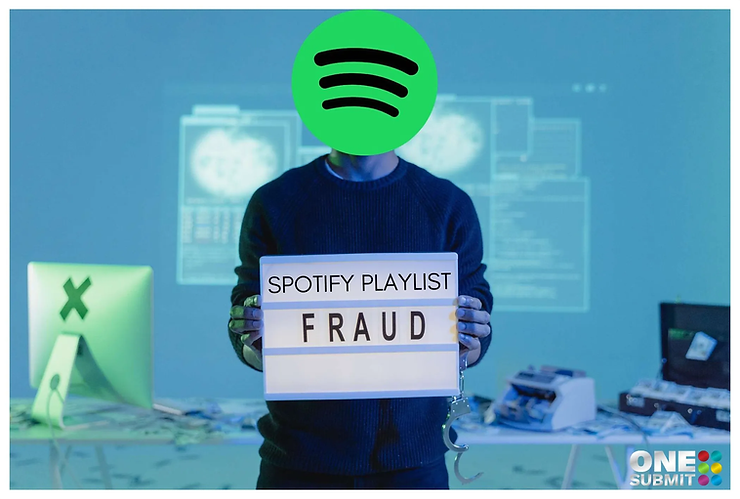 "Find out how to spot a fake Spotify playlist

How to avoid this kind of fraud?

Find Out How To Detect A Fake Playlist On Spotify

So our friend James decided to do some research and he found out that there are people around the world that will follow your playlist, if you pay them in return. So James thought this was an amazing idea. He believed that it would help his playlist look as if he had 50K followers, where in actual fact, only 180 of them, are real Spotify followers.

So of course James believed that this was the best method to sell song placements for his new “well established” Spotify playlist.

So James went online and found Peter from Wakanda, who for just $20 will add 15 thousand followers to James's playlist. It's that simple.

James, being the hard working guy he is, started buying 10K followers every month from Peter (point A on the chart below) and after a while, James's Spotify Playlist gained an astonishing 58 thousand followers.

James started offering a playlist promotion service through his newly established website. He wrote “I will add your track onto my 58 thousand followers Spotify playlist for just $65”.

+Be Careful! The Big Bad Spotify Playlisters Wolves Are On The Loose!

Indie artists worldwide started using James's service, and unfortunately got fooled into believing that his playlist would generate streams for them.

James started rolling in his profits and felt like the man.

Now back to the man from Wakanda. One day, Peter received a much more worthy offer for his bot Spotify accounts. So Peter decided to move them from James's playlist to someone else's playlist.

(Check out point B on the chart)

We know how difficult it is for emerging artists to pursue a music career and to be discovered in the music industry, but you all need to remember: Do not fall victim to these scammers like James and other Spotify playlist curators, with their fake playlists. It’s strictly a fraud, and it won't help you move forward as an artist in the music industry. Artists featured on a fake Spotify playlist will not be provided with organic streams and or genuine monthly listeners. The best case scenario is that it will boost up your song with fake streams and bot fans.

So how do you avoid this kind of fraud?

Listed below are some of the best ways to identify and avoid fake Spotify playlists, most of the tips can be used prior to joining these playlists. All music artists that are considering getting their song included on a Spotify playlist should read this.

These websites can help you spot which playlists are likely to be fake. It's not 100% bullet proof but in most cases it will give you a first clue whether the playlist is legit.

Again, this is not 100% the truth for all curators, encountering genuine playlists with a similar number of followers from the same curator is possible, but it is not very likely for this to occur.

3 - Curators have large playlists but hardly any followers for themselves

Always make sure to check out the playlist owners Spotify profile before attempting to submit your track to their playlist.

Most genuine playlist curators with a popular playlist would usually have a profile picture on their personal page.

Then this playlist should be identified as being fake, and even more so, if the names of the playlist's followers are very similar to one another.

If you consider submitting your tracks to a playlist, and the playlist curator accepts your song, without even considering the genre or quality of your track, then the probability of the playlist being a fake one is quite high. It is most likely that your song will not get any streams or genuine monthly listeners from these kinds of playlists.

In some cases, they will offer you a specific number of song streams, which can count as a fake stream. Genuine curators managing decent playlists in the music business are quite often selective about the songs they accept for a placement on their Spotify playlists. They do not accept any song that comes their way.

Genuine curators in the music business use social media ads and other forms of marketing to promote their playlists. When submitting your song, always ask the curator for the particular playlist he/she intends to add your song onto. Make sure to check his social media accounts, and if you see 20 thousand followers on their Facebook, Instagram or Twitter page and you don't see any likes or views to their posts, it's a giant red flag.

If you would like to examine a specific playlist, pick one of the music artists that are on this playlist, go into his/her artist's profile. By doing this, you will see that an active playlist will appear on the ‘Discovered On’ section from the artist’s profile.

You will need to consistently check if the playlist appears on the ‘Discovered On’ section of the top artists that have playlist placements.

The best option would be to avoid playlists that do not show up on the ‘Discovered On’ section. These type of playlists are not 100% fake however, they will not help you much when wanting to get your music exposed.

Fake Spotify playlists bring no benefits to any indie artist or musician wanting to expose their music. The quicker you detect a fake playlist, the faster you can rule it out and find a genuine and real one that you can benefit from.

This article is brought to you by One Submit.

We help music artists submit their music to genuine Spotify playlists, YouTube channels, Blogs, TikTok influencers, Radio Stations and Record Labels. We make sure every song submission is guaranteed a review. If a curator likes your track, they will add it to their playlist, channel and or blog etc.

We are all about helping artists get their music heard.

+Releasing Indie Music Is Like a Message in a Bottle: My Experience Getting Heard

+How to Find Playlists on Spotify that Accept New Music Submissions