What I learned on our cross country tour (An Infographic) 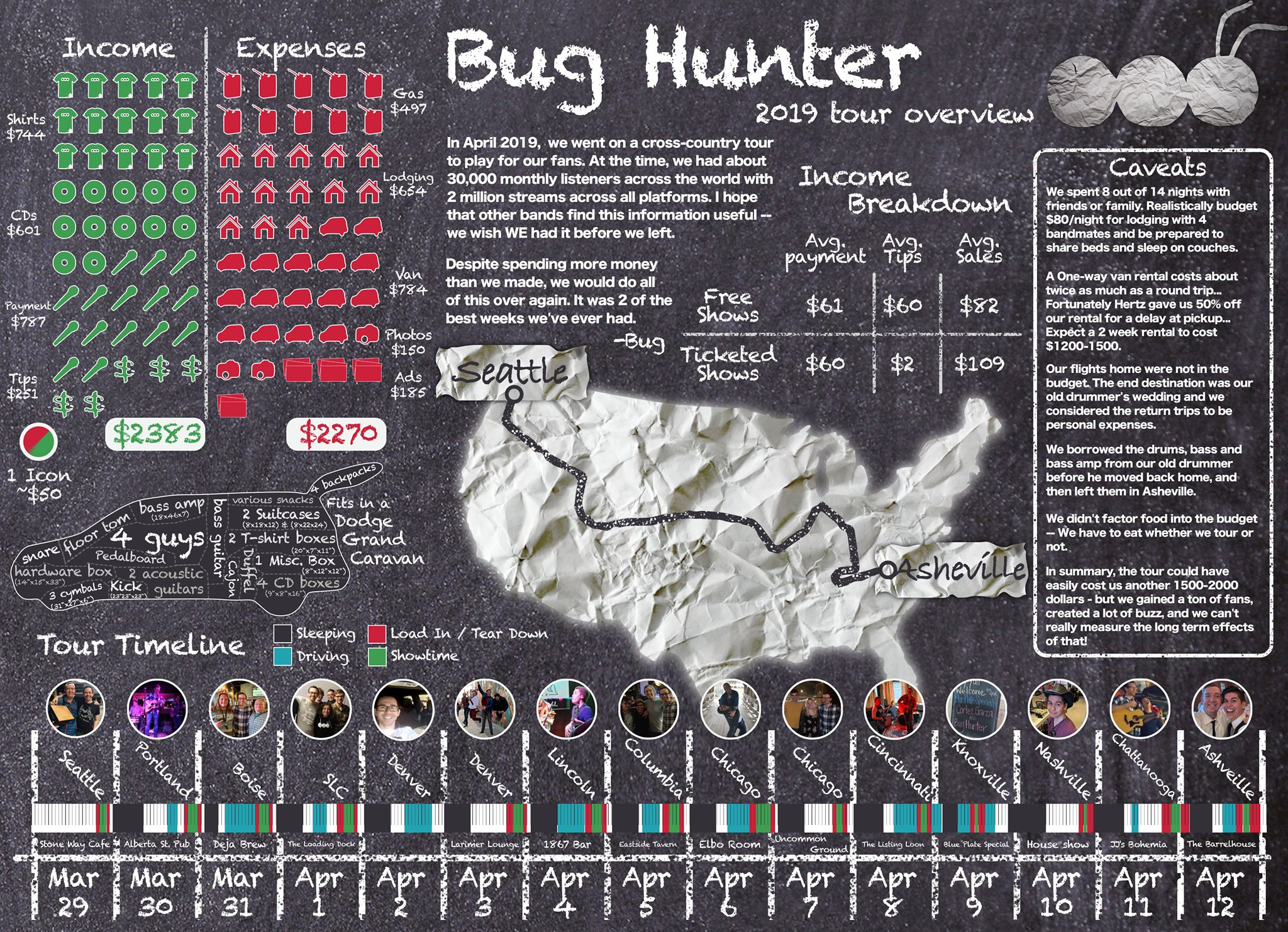 "In the past few years, there has been an uptick in what I’m calling “Discover Weekly Artists”. These are artists who, through various means, get enough of a jump in Spotify momentum (think 10-15 thousands streams in a short time span) that they start landing on people's Discover Weekly playlists. This playlist is hyper-specified to a user’s unique tastes, and therefore the odds of getting a “hit” (aka a fan of your music!) is much greater than it would be on a generic curated genre playlist. While the curated playlists have a larger reach, the algorithmic playlists have a much higher success rate of finding someone who really connects with your music.

The small indie artists that accomplish this — myself included, after a few viral reddit posts put us on the algorithm’s radar -- have found themselves in a position that musicians 10 or 15 years ago probably never could’ve imagined: Making music out of our bedrooms, no label, no manager -- with thousands and thousands of fans. Like all good things, this comes with a catch: These fans are spread very, very thin. Because Spotify’s reach is global, my 75,000 monthly listeners are spread far and wide, from local fans in Seattle all the way to Germany, Australia, and almost every country on earth. So while 75,000 fans is an enormous accomplishment, there is a very little hard data on what that kind of fan topography translates to as far as concert attendance.

+Why Artists Should Focus On The Spotify Artists App

It started as a plan to play a couple East Coast shows while attending our old drummer’s wedding in North Carolina. Eventually our radius got so big that we just decided: “Hey, let’s just drive out there and play a show every night along the way”. So we packed up the minivan in Seattle and drove for 15 days, playing 14 shows without any prior experience in the markets we were visiting (save for Seattle and Portland).

While we had a blast, got our foot in the door in 12 new markets and made a ton of new contacts, some of the results were a bit mixed. As you can tell from the infographic, we basically broke even on 2 weeks of work for four guys. There’s a lot of opportunity cost in touring (especially for those bandmates who have day jobs, which is… probably everyone reading this). We sold out a venue in one city but only had 9 people show up for us another (the local opening bands didn’t bother to bring anyone out, which always makes it more challenging). But those 9 people sang their hearts out to our whole set and kept us motivated for the next show (where 85 people showed up and we rocked the house!).

At the end of the day, we never expected our little bit of online success to translate to 600+ capacity venues across the country. This industry is a grind, and sometimes you have to dive in, share beds with your bandmates and hope to break even so you can keep the momentum going for next time. What we do have now is hard to put a price on. Things like a venue in 12 new markets who know who we are and know we can turn out a "good enough" crowd on a Wednesday night. A few hundred fans who were thrilled to see us live and connect with us (and I disproportionately saw their names pop up as pledges as we ran a kickstarter for our new album a few months later!). And we can pack a minivan like a Tetris champion (we were our own roadies and got really, really good at this).

Hopefully this gives a little context to the other indie musicians out there who have found themselves in a similar DIY position. I’ve included our sales/expenses breakdown, our driving/sleeping/playing schedule (I would NOT recommend doing what we did, but it was possible!) and how much gear you can reasonably fit in a Dodge Grand Caravan.

I would’ve thought that 5 million streams and 75k monthly listeners would’ve been impossible 3 years ago, but I also thought it would look much different than it does. So it’s my hope to shine a light on what to expect as an indie artist. It’s cliche, but you have to enjoy the journey, because it’s a long one. No matter if the future brings wild success or we fade back into obscurity, that 2 week trip will definitely be considered “the good old days” in my mind."

+Tour Tips from Charming Disaster: Add a Touch of Class

+Convincing Strangers to Let You Sleep on their Floors: A Primer

+16 Types of Shows We've Played on the Road