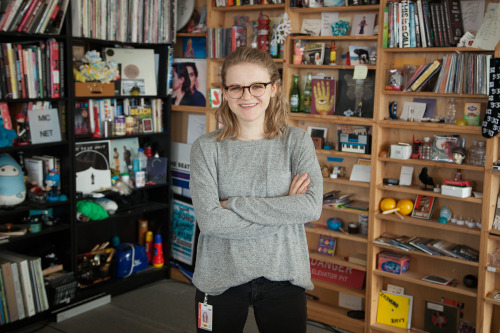 "The Tiny Desk is essentially the opposite of a concert venue or a music video. There’s nothing to hide behind except a real, tiny desk, in a real, very-active office. In some ways, our look is easy to replicate, because it’s all about the music. We strip away the big lights, the PA system and all the bells and whistles. Of course, this can be a little nerve-wracking for some artists. Recently, a musician came in, and it was clear he didn’t know exactly what he was walking into. A performance that straightforward and that intimate requires a willingness to rise to the challenge.

A lot of people film their Tiny Desk Contest entries on their own, so we thought we’d share a few things we’ve learned by filming almost 600 of these things. This isn’t a checklist, so don’t let it intimidate you. Remember, this contest is all about your music. That said, since your video may expose you to new fans outside of the NPR family, we want to help you look your best.

Here’s how to make yours shine on simple video:

If you can film with natural light (i.e., in front of a big window) — that’s ideal. That’s bound to give you a natural-looking, soft light with few problem areas. Alternatively, if you’re filming outside, cloudy days offer well-balanced lighting situations and help avoid harsh shadows. If you don’t have daylight, though, try to bounce your practical lighting (i.e., a lamp) off of a wall or the ceiling above you — otherwise you run the risk of harsh shadows.

If it’s just you, you’ll probably want to be in the center of the frame. Use something as a stand-in for you so you can orient your shot before taking your place. If there’s a group of you, be sure the camera can see everyone without any uncomfortable crops. Ideally, the lead vocals should be upfront and center. One cardinal rule of videography — if something is making noise, try to show us what it is. Try not to hide what the musicians are doing.

+How To Make A Music Vdeo On A Tiny Budget

If you have a tripod, that’s great. If you don’t, you can make one for yourself out of household objects. At NPR, I once used a stack of cases of Mexican Coca-Cola as a tripod (don’t tell Robin), but I’ve used random objects like trees, too. Just get some height and lean your camera against something — ideally something that fits the camera snugly to avoid any costly spills.

4. If You’re Using Microphones, Make Sure You Check Your Audio and Balance Before You Play.

If you’re playing with a group of musicians, you should orient yourself around your microphones as you would around a campfire. Balance the sound naturally to minimize bleed between the microphones — and that goes for singer-songwriters, too, who are trying to capture both voice and guitar or piano with one mic. If you’re using a cell phone for the audio as well as the video, don’t position the camera on the instrument or too close to it (for example, don’t balance the camera on top of the piano unless, of course, you like the sound). Also be sure to minimize external noise, unless it’s something you want in your performance for atmosphere.

This is a Contest about music and performance — not, ultimately, about your video. Make sure you’re in a place where you can be honest and bold with your performance. The truest version of your own music will be something we’ve never seen before, and that’s what we’re looking for. Also, once you’ve recorded your video, make sure you watch/listen back for any hiccups both on the camera and on a bigger screen (like your laptop).

A lot of good web videos grab a viewer’s attention right from the beginning. Try and cut the opening of the video so that a viewer gets to the music as quickly as is comfortable for you.

Enter the video to npr.org/tinydeskcontest between Jan. 13 and 29. Okay, they made me say that. But do it!"

If you’re interested in entering NPR Music's 2017 Tiny Desk Contest, check out the Official Rules and film your video! NPR is taking submissions from Jan. 13 until 11:59 p.m. ET on Jan. 29.

+33 Gig Promotion Strategies (And Which Ones Actually Work!)

+Why indies should still care about radio