How To Make A Music Video On A Tiny Budget

"I just released a music video. It cost me exactly $0 to make and it looks pretty darn awesome if I do say so myself. Well, I can say so because I didn't make it. I kind of had nothing to do with it - other than writing and recording the song of course (and showing up and shooting the thing).

So how did this happen?

Well, 4 years ago I played a house concert in LA. After the show a woman came up to me and said she was really moved by the performance, is a filmmaker and wanted to make a music video for me. I wasn't planning on creating a music video at the time and told her I didn't have a budget together for one, but she told me it would be a passion project for her. We got together to discuss concept and then spent a couple days with a small crew on Venice beach shooting it. As time passed, I kind of forgot about it (I wasn't paying her so I couldn't really set deadlines), but then a few months ago I got an email out of the blue from this filmmaker with a Dropbox link to the video and a brief note "sorry for the delay." Ha.

There's an old saying, "Good, fast, cheap. Pick two." So, this is good and cheap. But it wasn't fast. 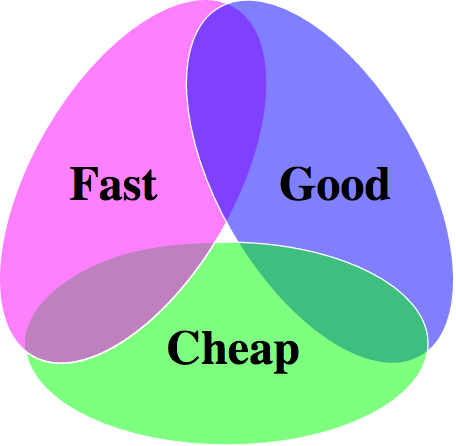 When creating your music videos (and recordings), always keep the You Pick Two philosophy in mind. It holds true in most situations. You may get lucky where your good friend, who is an awesome filmmaker, just finished up a giant budget film, has some free time, doesn't need the money and will work on your project to help you out. But that is beyond rare. And you definitely can't plan on this.

But there are some things you can work out on your own to help keep your costs down.

It's All About The People

It's better to have less-than-ideal gear, but work with people who know what they're doing, than have top of the line gear and only a passing knowledge of how it all works.

A talented DP and editor can actually polish a turd. But it may still stink.

Find some talented, hard-working people who are passionate about the project to help you out with it.

+It Is About Who You Know

It's All About The Concept

The more creative the concept the more views it will get. Unless you have a massive budget to make the video LOOK stellar (through camera work, costumes, lighting, acting, dancing, special effects and editing), you need a concept that overshadows the lack of budget.

But the look of the video isn't everything. Jack Conte's videos, shot on iPhones and other not-so-great cameras got millions of views because they were super creative. OK Go's treadmill video for "Here It Goes Again" (from 2006) went crazy viral with over 80 million views and put them on the map. And it was shot, one take, with a crappy camera on a tripod. Kina Grannis spent over a year making her jelly-bean–themed stop motion video for "In Your Arms." The Black Keys' "Lonely Boy" video is a single-take shot of a boisterous dancing businessman.

All these videos went viral because of their concept - not budget.

It's (Not) All About The Gear

Don't worry about the gear as much. Yes, professional DPs will want to shoot with RED's or, gasp, ALEXA's, but, again, Jack Conte made some pretty darn amazing videos shot only with an iPhone (in 2013!!).

DSLR cameras are solid (as are many new phone cameras) and they're not too expensive. It really comes down to the lighting and the edit.

It's All About The Lighting

Rule of thumb, the better the lighting the better the video. iPhones notoriously don't do well in low-light situations. They look the best outside because the sun is the best light source there is.

Either shoot it outside, or plan to spend a hefty amount on (or pull some serious favors) on good lights.

+What We're Learning About The Music Industry

It's All About The Performance

If you're going to sing in the video, you should practice re-creating the vocals from the recording to a T. Learn every breath and every inflection. If the visual vocals don't match up to the recorded vocals, it will be jarring to the audience.

Yeah, it's hard to look good on camera. And it has nothing to do with your looks. The act of lip synching (and acting on cue) is incredibly unnatural. But then again, so is performing onstage in front of a bunch of people. It takes practice to get good at. So practice this. And if you're going to be, uh, acting in it - rehearse that with someone who knows what they're doing and can give you direction. In the biz, we call these people Directors.

It's All About The Edit

Like the mix in a recording (or live show), it doesn't matter how great the elements are that go in if what comes out is sh*t. The edit is the most important step of your video making process. Either master Final Cut Pro or Adobe Premier or put the little budget you have into hiring a pro video editor.

You really should learn a video editing program (like FCP or Premier) because it will help you in every aspect of your music career. If you want to pump out a quick 15 second Instagram video you don't want to have to hire someone every time.

iMovie (on MacBook and the iPhone) is fine for the time being, but for more extensive projects and official music videos, it's a bit limiting.

It's All About The Song

And, of course, if the song sucks, it doesn't matter how great the video is. If the song is powerful enough, you won't even need a expensive-looking video - just something that does it justice.

The video should enhance the song - not detract from it. It should help tell the complete story - or a different story. That story, though, shouldn't be "local band with no budget creates crappy looking music video because they read on some dude's blog they need to make music videos these days." Yeah, it can go both ways, a crappy looking video can kill the magic of a song.

The video should make the viewer FEEL the same way she feels when just listening to the song.

Students are cheap/free, but rarely will they be able to deliver you a professional looking video. You can only learn so much in the classroom. Team up with students to be assistants - help set things up, position lights, be extras, maybe even shoot a bit. Students, have access to incredible gear and resources. Especially those at universities with big film programs. Some will even have sound stages on campus (like at USC). If they can open these resources up to you, it may be worth hiring them as (unpaid) interns.

How did you make your video? Post the story and the link to it in the comments and I'll check it out!"

+How To Make It