Facebook’s Music Moves: How to Engage Your Fanbase with Lip Sync Live 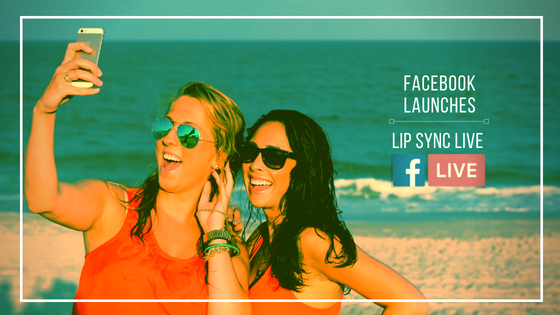 "A quick look at how to use Facebook's new feature and 6 ways you can use it to boost your social media game.

And by “it” of course, I mean Musical.ly.

If you’ve ever been put in Facebook jail (*raises hand*), you are literally about to be given immunity. Or is it future-pardoned?

Whatever - the point is this.

Not only has Facebook been making tons of copyright deals with major and indie labels, but have now announced a new feature called “Lip Sync Live”.

Imagine being able to go live at your next gig and record your best covers and not have your video taken down.

From weddings and holidays to everyday celebrations, the special moments in life are often ones we associate with music. Together with the music industry, we are working to enable people around the world to include music in their videos on Facebook, opening up more options for creativity and sharing memories with friends and family. We’re testing this in several markets now and look forward to making it available more broadly soon.

Lip Sync Live is still being rolled out, but it will allow you to pick a popular song and sing along on a Facebook Live stream. Previous copyrighted entries that would have sent you straight to Facebook jail without collecting $200 (and maybe even get fined), are now going to be fair game.

When broadcasting with Lip Sync Live, friends will see the artist and song highlighted on the video and can tap to follow the artist on Facebook.

This is no doubt a direct competitor with the popular app musical.ly and in a less direct way, apps like Smule and the once popular DubSmash.

If you’ve ever heard yourself say — or even allowed yourself to think — that Facebook was for old people and apps like Snapchat was where all the kids are… well, for a while you may have been partially right.

Facebook is STILL the largest social media platform in the game. (Have they ever not been?)

As of the first quarter of 2018, Facebook had 2.19 billion monthly active users, according to Statista. In the third quarter of 2012, the number of active Facebook users had surpassed one billion, making it the first social network ever to do so. Active users are those which have logged in to Facebook during the last 30 days.

And not that this feature has been widely discussed or used in the realm of music marketing, but this feature is definitely separate than the Sound Collection function that was announced in December.

It’s still a huge step in the right direction; especially for musicians in cover bands or even original artists that use covers in their set.

Consider it yet another engagement asset in your fight to keep your fan’s attention.

Here’s a quick step by step of how to use the feature.

Step 1: Tap on the Live button from your iPhone.

Step 3: Select a song that fits your mood. Press the play button to preview different songs.

Step 4: Once you've selected a song, get ready to lip sync. Press the play button when you're ready to start your lip-sync session — you'll see a brief countdown then the music will begin.

Step 5: Lip sync your heart out! Try different songs by tapping the music note on the bottom nav bar or tap the wand icon to apply different filters and effects to your video. Friends can join your live broadcast to comment and react as you share your creativity.

Now, there’s no definitive word at the time of this writing if this will be strictly for personal profiles or also include business pages. Chances are it will be rolled out in phases, like many of the more popular features (I still remember the day I first saw the “Go Live” button on desktop).

While this is a direct competitive step taken towards musical.ly, it can also be perceived as a step towards remaining competitive with YouTube.

YouTube has recently made several announcements regarding it’s platform and have more quickly and effectively worked out deals with major record labels. Obviously, you could still get a music video taken down, but it was far less frequent and was definitely done so with less fervor.

WHAT THE NEW MUSIC FEATURES MEAN TO YOU

The one thing that remains the same is your relationship with your fans. And right now you’ve got the ability to harness the power of new Facebook features. Don’t let is slip by you (e.g. the fact that you’ve yet to incorporate live streaming in your social media plans).

With that in mind, here’s a quick idea list to help jog your creativity. Start thinking about creative ways you can use Lip Sync Live as part of your social media strategy.

6 Ways You Can Create Killer Content with Lip Sync Live (you know, whenever it gets rolled out to you).

1. Use Lip Sync Live as a “trailer” for your gig

Choose a song that will be a part of your set for your upcoming show. This could be something you post earlier in the week, or even at the venue the night of the performance.

2. Host your own Lip Sync Battle in the comments

One way to engage your fans online might be a “Lip Sync Battle” in the comments. It could be themed - where people put on their best rendition of the same song, or more like a best song format on the Lip Sync Battle show on Spike TV. You get the idea. Challenge your fans to a battle and sing, uh I mean sync your heart out.

3. Have a Karaoke Contest before your show.

It’s just another take on the Lip Sync Battle, but imagine having 2-3 of your not-so-shy fans singing songs on your page (and tagging themselves).

4. Get input: Should this be the next cover we learn?

Instead of a regular post or poll, take to Lip Sync Live to get your fans input. Should we include this song in our set? Or better yet - ask them what song you should cover next and ONLY accept Lip Sync Live submissions. Come on, that’s gold.

5. Make your own music video

You don’t even need a reason. You could simply make your own music video to a song you love. In fact, that’s the whole intent is for you to have fun with it. Facebook has a renewed focus on Friends and Family and this is obviously one small piece to that friendly puzzle.

All right. One of the most important things you can do for your fans is to set their expectations. Obviously, being the creative type you are, spontaneity is great, but it’s so easy to create and document what you do now.

Create a short weekly episode where you live stream on the same day (maybe even same time) and give it a unique hashtag.

Several days of the week could fit nicely into your plans…

You get the point. You can also download the info graphic with these ideas.

It doesn’t have to be a hashtag; they’re just easy to remember. And for the most part they’re going to be things that trend on their given day (#MusicMonday and #NewMusicFriday being the most popular musical day-specific ones).

As if this wasn’t good enough news already, Facebook confirmed that in the coming months they’ll be testing options for adding music to Facebook Stories.

There’s already a slew of Instagram integrations that have recently rolled out, but that’s a separate, wonderful post of its own.

For now? We’ll be tuned in as Zuck wraps his hands around the jugular of yet another popular idea and brings it to the forefront of Facebook’s 2 billion users.

What other ways can you think of?

Whatever you do, start thinking of them now. Be the first on your scene to incorporate the new feature into your Social Media strategy.

Don’t have a strategy? It’s time to get one."

Leonard is an entrepreneur, certified content marketer, frequent hi-fiver and Founder of IndieBandCoach.com, a community obsessed with helping indie musicians connect with fans and make the most of their online presence. Leonard started Indie Band Coach as "the resource he wishes he had" when he was a full-time bandleader, booking agent, and artist manager. He currently hosts a YouTube show, #YourWeeklySocial that provides quick social media ideas for the upcoming week and a 30 Day Social Calendar sent via email to help bands conquer their content ideas for the month. #WorkSmarter #GigHarder