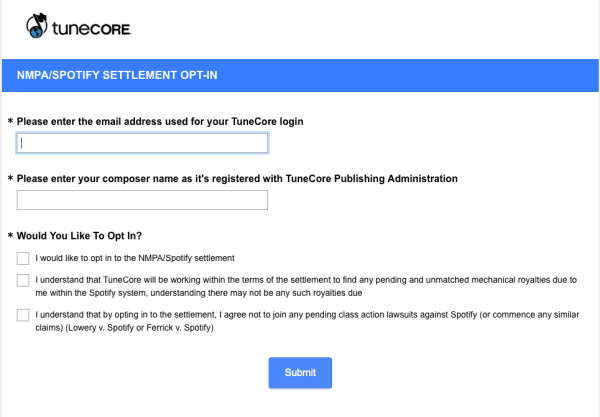 "Are you fucking kidding me? A Survey Monkey form? If you are a Tunecore songwriter, you recently got an email asking you to sign up for the NMPA/Harry Fox Agency/Spotify settlement. Songwriters are directed to the above Survey Monkey form. This is it. No details. Nothing. Nada. In particular, there is no mention of the possible statutory damages that songwriters are waiving by opting in to this.

So it’s your choice songwriters:

Sign up for a backroom deal cooked up between the NMPA, Harry Fox Agency and Spotify? Or wait for a FAIR and TRANSPARENT process supervised by a federal judge?

Wish all choices were this easy."

The major publishers are on the verge of a major settlement with Spotify. Details have emerged that make it clear that everyone gets something except indie songwriters. Well, indie songwriters may get a few dollar IF they help build Spotify’s spiffy new database by dutifully submitting publishing information. But unlike the major publishers they won’t receive penalties or the statutory damages that may be legally due to them. Statutory damages can be in the thousands of dollars per unlicensed song.

And why exactly are indies helping build a Spotify publishing database? I mean Spotify built a streaming service and raised billions of dollars and they forgot to build a song royalty and licensing payment system? It’s not songwriter’s fault the company is apparently run by incompetents. Further there were also plenty of third party vendors that could have done a halfway decent job licensing and paying royalties. Which reminds me why does HFA get in on the deal? They were in charge of licensing the songs that didn’t get licensed. This literally punishes the victim while rewarding the apparent mass infringer and its enabler in chief. This is a complete outrage.

+Why would I Need a publishing administrator if I already work with ASCAP, BMI, or SESAC?

Judging from preliminary data it appears that the unlicensed songs (and resulting unpaid royalties) were largely indie publishers not represented by the major label publishers or the Harry Fox Agency. So why is it that any remaining royalties will be paid out according to publisher market share? That will only guarantee that the major publishers are paid royalties that should belong to indie songwriters.

So here we go again. In a shortsighted cash grab, the major publishers will take what most average-hardworking-play-by-the-rules Americans would call a $5 million bribe, in exchange for giving Spotify an out on the ongoing HFA audit and provide a smokescreen that misleads independent songwriters and Spotify investors into thinking that the unlicensed song problem has been fixed. It has not. In fact it’s worse than fixed. It’s a $5 million dollar whitewash."

+Why Music Makers Are the Real American Innovators