Tour Diary: What I Learned On the Road with Metal Heavyweights Mushroomhead 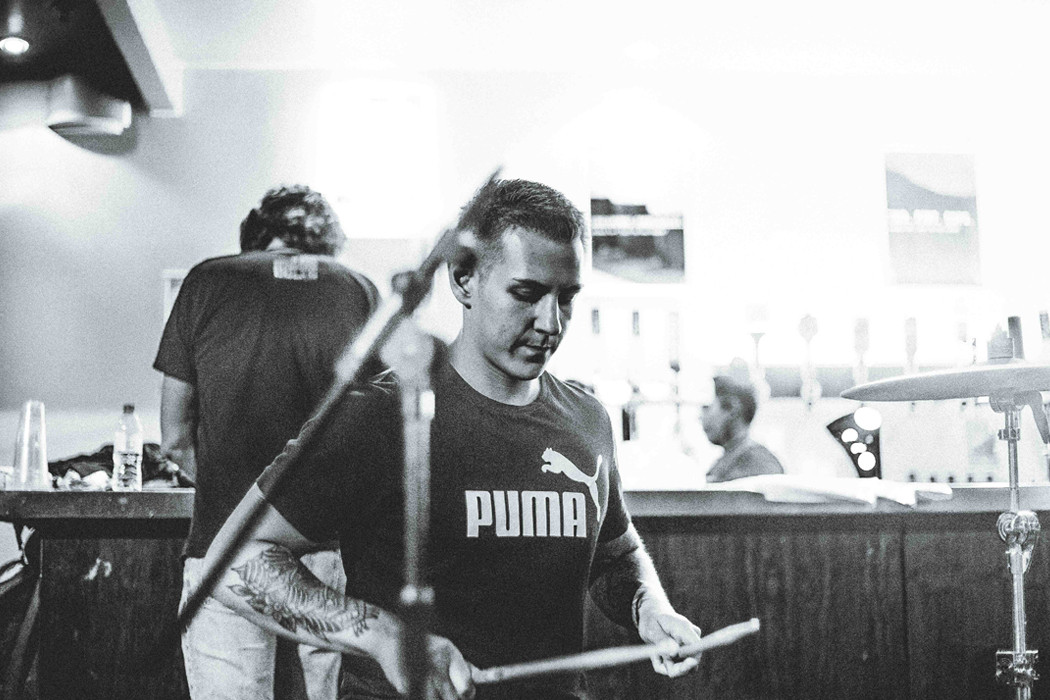 "What a week! Although by no means a long run of shows, my band Familiar Spirit’s 2019 UK summer tour in support of American metal heavyweights Mushroomhead was an utterly insane and eye-opening experience — filled with wonderful people, great venues and an abundance of earth-shattering riffs.

Having only formed a year ago, this was an opportunity that my band just couldn’t pass up, and I learned a lot from the experience. Here’s some of what I took away from the tour, and what I think young bands can do to prepare for and seize their own career-opening moments.

It was also expected that Mushroomhead were going to bring the heat every show; they did just that. Night after night, the veterans performed with both conviction and theatrical charisma to put on a visually immersive and sonically demanding display. And while the members of the band all sported fearsome, intimidating masks, they were some of the sweetest and awesome guys to be on the road with.

+Top 5 Ways to Help Prepare You for a Live Performance

With only ten shows under our belt under the name Familiar Spirit, we knew that our band was largely going to be performing to new audiences, unacquainted with our sound, our identity, and our vision. This tour was a significant learning curve for me. It helped give me insight into how each band operates a little differently.

A band is comprised of the individuals within it: The culmination of the different personalities form the essence of the band as a singular entity. The collective attitudes and behaviours of a band are reflected in their daily activities and choices while on the road. For example, how considerate a band might be when they’re setting up and striking their equipment on stage, or even their willingness to share equipment, a green room, or a hospitality rider, says a lot about that band’s chances of finding success down the line.

Thankfully all the bands on our tour were awesome to work with throughout, but the reality of a tour package is that there’s a business hierarchy in place — with the headliners on top and support beneath — and those that overstep their boundaries may not have a second opportunity to look forward to.

Touring on a shoestring

This tour kicked off in our hometown of London, and we had many familiar faces in the crowd, including our manager and agent. Arriving at the venue at 4pm for load-in, we were simply surprised by just how large the venue was, with a backstage that seemed to span for miles. Itching to sound check at our allotted time of 5:30, we waited patiently for what felt like forever. I was clearly unaware of the notorious “first tour date” setbacks and technical issues that needed to be sorted out.

On top of that, we severely underestimated the amount of space we’d have to ourselves on stage. Strike one. Mushroomhead, by the way, features up to nine members on stage at any given time and makes use of multiple distinctive acrylic water drums spread around the stage (not to mention their enormous double bass drum set). We only had around 20 minutes to set up everything we needed on stage, including my own drum set, and so learning to solve unforeseen spatial issues took precedence over complaining for a couple extra inches. We managed to just about line-check in time for the doors that were pushed back half an hour.

Thankfully all of the dates that followed remained on schedule and there were no major problems in that respect, but upon entering the second venue of the tour in Leeds, we were met by a stage that must have been half the size of the venue the night before! There was simply no way we could possibly fit both of our drum kits on stage simultaneously, so… more problem solving had to ensue.

We had to figure out how we could perform our set without causing any inconvenience to them (remember the hierarchy?), and I am thankful that their drummer, Skinny, was willing to let me play his drum kit as long as I did not adjust any of the settings. I obliged.

I never would have believed that I would be playing on Mushroomhead’s drum kit for that show, or most of the remaining dates of the tour. It was a completely alien setup to me, but that was something I was willing to deal with. Learning to adapt to new circumstances and last-minute changes is as important a part of being a professional musician as learning how to win over a crowd night after night.

For the drummers out there, the biggest challenge for me was having to play on a drum kit with two individual kick drums and two single pedals as opposed to using my favored double bass drum pedal. Not only that, but the kick drums were equipped with kick triggers rather than microphones, which provided a completely different playing response and feel!

There were a lot of compromises that we were willing to make as the opening band, but when you’re not able to lock into a groove with your band it becomes difficult to perform at your best. Thankfully I was given permission to swap out my own snare drum and crash cymbals to play, and this helped me feel more comfortable on stage. These are the most sonically distinctive parts of any drum set and they help to define a drummer’s musical voice.

After overcoming all of this on a tour of this calibre, I learned to have greater confidence in myself to perform at a high standard, regardless of being in or out of my comfort zone. There was a real essence of “adapt, improvise, overcome” at all costs, which struck me as a crucial mantra for any touring musician.

The response we received after every show was amazing, and having the opportunity to meet fans in cities across the UK that we have never played for was both humbling and exciting. People promised to see us if we came through again and this was the best feedback we could ask for.

+It's All About Your Fans and Not You

We are still learning how to bring out the best in one another. When you’re on the road, you’re among your fellow bandmates nearly 24/7, and it is likely you will get at each others’ throats. What’s more, in a high-pressure situation like supporting a more popular act, emotions get amplified. It’s likely that within your band there will be a broad range of personality types vying for space, so it is essential that you be respectful of one another and learn how to balance each other out when the scales tip in a certain direction.

Our vocalist Cameron is incredibly creative, imaginative, and naturally chaotic, whereas I thrive on structure, organization, and strategic thinking. We learned early on that we were at our best when I could make space for him to explode with energy, and then I could feed off of it reflexively.

Being the opening band on a tour package meant that it was by no means the most glamorous lifestyle on the road. Mushroomhead and the second support act, Waltari, from Finland, shared a Nightliner for the tour. We toured in a large van and although it wasn’t necessarily uncomfortable, it was far from luxurious on long drives. But that’s the reality of touring, especially touring on a budget.

Fortunately we did receive hospitality riders which helped us out, but we often were only finding time to eat whenever we could. It’s hard to schedule time to comfortably eat your daily meals on such a tour. Think about it: Load in, soundcheck, snacking in the green room before doors, performing, striking the stage, hitting the merch table, and loading out. By the time we ate dinner every night, it was close to 1:00 am! While on the road, you really have to find ways to eat as many fruits and vegetables as you can, because it’s also difficult to eat healthy on tour!

+THIS IS YOUR MOTHER SPEAKING!

We not only had an incredible opportunity to perform on stage each night to passionate and open-minded listeners, but we made some amazing friends along the way. Both Waltari and Mushroomhead were incredibly grateful for having us along for the ride. And this tour surely taught me some valuable lessons. One thing in particular is that touring is largely about striking the right balance between being emotionally flexible and efficiently organized and steadfast.

Touring has its ups and downs, and it’s not always easy. But being emotionally flexible when unexpected difficulties arise means you can deal with certain situations far more effectively. Plus being well-prepared and organized going into a tour, especially with regards to maintaining your own belongings and your gear, means you are far less likely to fall upon any nasty surprises!"

+Touring Tips from Charming Disaster: Add a Touch of Class

+4 Tips For Building More Fun Into Your Next Tour

+POSSESSIONS: What to bring on an efficient tour

Gideon Waxman is a London based drummer and music educator who holds a Bachelor of Music degree from the University of Westminster. You can read more of his advice over at his popular online music resource: Strong Sounds.