What is Non-Exclusive Licensing?

**Guest post by Keller Medlin, a music producer based in Nashville, TN. He is also the founder of Sounds Sphere - a marketplace platform helping artists and songwriters create great songs faster and with less cost. 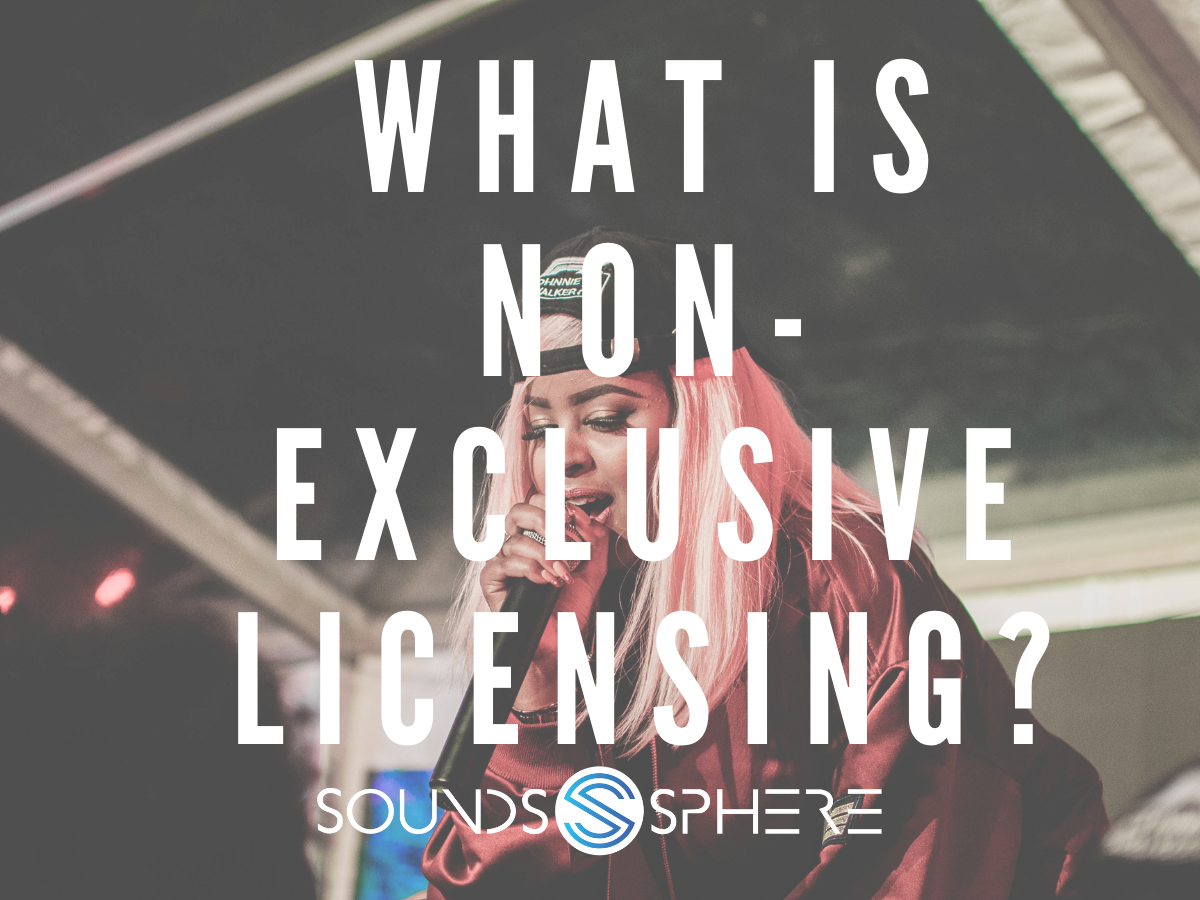 "As an independent musician, artist, producer, or songwriter having information is critical to your success. Being able to grow and sustain a career in music is tough. But by equipping yourself with knowledge you give yourself the best chance of success.

There’s a subtle lesser known aspect of music production that has slowly become more popular over the course of the last decade. Probably the culmination of this model’s success was demonstrated with “Old Town Road” which is now the longest running No. 1 song in history.

+The people who write, record, and produce music

What is this model?

Non-exclusive licensing - and I don’t mean for sync.

Non-exclusive licensing is fairly simple. A producer makes an instrumental, or “beat”, and puts it up online for sale. Multiple artists can license the same instrumental and each make their own song. Each song is a separate copyrightable work, or derivative work.

The terms of non-exclusive licenses usually restrict the amount of sales, streams, and performances that the artist can have with their song, but in the case of many independent artists, this would allow for whatever would have naturally happened with their songs even if they had paid a producer in the traditional model.

Imagine getting the same quality production you would have typically paid thousands for, for less than $100.

Now imagine that you release your songs and they have the same success streaming that would have happened even if you had paid thousands for the production.

That’s the power of non-exclusive licenses and why I am passionate about educating artists and songwriters about their use.

I recognize this is counter to the traditional model of getting songs produced. And this model won’t work in all cases, especially when an artist wants to build a custom track from scratch.

But non-exclusive licenses are certainly a tool worth keeping in your repertoire when thinking about creating and releasing your songs.

I like to use the analogy of leasing a car when describing non-exclusive licenses. When you lease a car, you are agreeing to a set of terms put forth by a dealership in exchange for a new, perfectly good car.

The restrictions around leasing include mileage and normal wear and tear, but unless you’re driving thousands of miles a month, leasing a car technically gets you everything you would have had buying a car outright.

The benefits of leasing include:

These same benefits apply to non-exclusive licensing of an instrumental. As mentioned in the introduction, when an artist or songwriter licenses a beat non-exclusively, they benefit from a drastically lower up front payment.

And because artists are paying a lot less for their production they can afford to release songs more often and output a higher amount of content.

Not only that, but there are more options and variety that an artist can choose from when licensing non-exclusively. Since an artist’s budget goes further with non-exclusive licenses, they can afford to license a wide range of styles and work with different types of producers.

Because all tracks are fully produced, you can already hear the finished beat so you know what it will sound like and have the benefit of pinpointing sounds you want without hoping a producer hits the mark on a custom job.

Another great reason to use non-exclusive licensing is to try before you buy. If your song starts to blow up or you decide to do so, you can typically go back to the producer or website you licensed a track from and buy out the exclusive rights.

This is great news for artists who want to own their production, not have restrictions on their songs, or who are concerned about other artists using the same beat.

Speaking of other artists using the same beat, let’s dive a bit deeper into the tradeoffs that artists compromise on when licensing a track non-exclusively.

Remember how we discussed the importance of information in the introduction? Here are the things you need to know about how non-exclusive licenses work in order to make a decision on using them.

A couple points on the considerations above.

First, multiple artists having the same beat does not necessarily mean that the end resulting songs will sound the same. Often you can get the stems to the instrumentals with your license so you can customize the arrangement or even add new sounds.

This means you could license a track non-exclusively and completely change the final sound to be almost indistinguishable from another song on the same original beat.

Secondly, it’s not necessarily a bad thing to have the producer splitting the publishing and master. When producers have “skin in the game” so to speak, they are just as invested as you in the success of the song.

Many producers have more clout than artists they work with, so a producer pushing and promoting your song can be more beneficial than trying to do it alone.

Where To Buy Non-Exclusive Licenses?

In its current form, the model of buying non-exclusive licenses centers around producers having a beat store. The company that powers most of the online transactions for producers is BeatStars.

However, there are many options available, not all of them favorable to artists. One of the long standing problems with the accessibility of this model has been the experience from the artist side.

Historically, websites provide technology to producers that allow them to sell their instrumentals online. Most have a marketplace where artists can browse, but the platforms make their money from producers which means the experience is prioritized for producers and not artists.

This poses a few problems. First, artists have to wade through low quality and irrelevant content, making the time it takes to find a beat they like significantly longer.

Secondly, the curation itself leaves a lot to be desired as endless scrolling of playlists separated by genre doesn’t work any more. This model of curation was fine in 2000, but in 2021 and beyond, the way tracks are displayed and curated needs improvement.

That’s a lot to manage and a lot of pressure on the artist to navigate this model. Perhaps this is why it hasn’t become popular in other genres outside of hip-hop.

+Songwriters: Are You Pitching Your Songs With A Shotgun Or A Rifle?

We mentioned information at the beginning of this article and now you have it! Hopefully this sheds some light on the non-exclusive licensing model in its current form, and helps to explain where it might go in the future.

At a minimum, artists and songwriters deserve the same care, time, and attention that producers have from the platforms helping them sell non-exclusive licenses online.

This is what I’m working to build with Sounds Sphere - a marketplace platform created for artists & songwriters so they can have the best possible experience leveraging the non-exclusive model.

Because doing things as they’ve always been done is starting to become dislodged. Artists are more empowered with options and deserve a system that works for them rather than against them.

As we move into 2021 and beyond, I expect more artists, especially independent ones, to start using non-exclusive licenses while at the same time, new genres breaking into the model as well.

The music industry is quickly changing, the pace of which was accelerated by the pandemic. As an independent musician you are more empowered than ever before to take the reigns of your own success and build a sustainable career.

And while the non-exclusive model might not work for everyone, at least you now have the information you need to make a good decision for your own song creation process."

+How to Create a DIY Music Project Without Breaking the Bank

+Recording Your Music at Home Made Easy