Why would I be a support act?

**Guest post written by James Redhead, one half of the duo behind the music podcast Anyone Can Play Guitar. 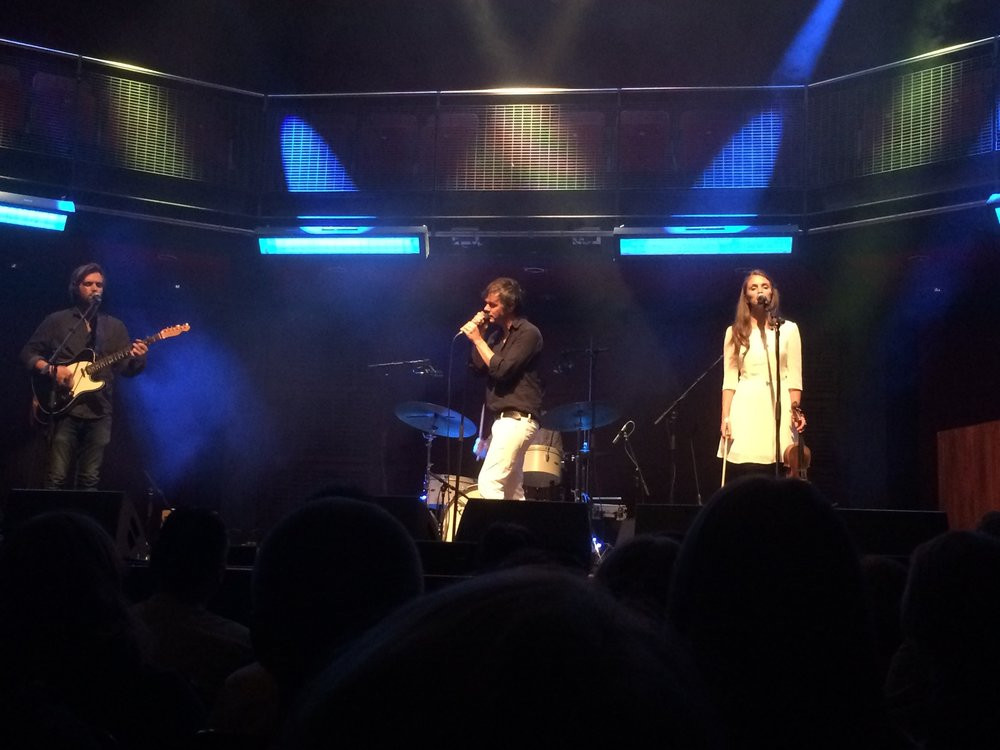 Roddy live in action on his Deluder tour.

"Or perhaps another way of looking at it, is why might I not want to do support slots? This is an angle we didn’t consider much when being in a band, and from speaking to Roddy Woomble of Idlewild in episode 006, there are certainly a number of pro’s and cons.

We thought it worthwhile to therefore give a balanced view based on what we’ve learned so far, to help all you bands and artists make as informed a decision as possible when you’re presented with such opportunities, or even before you start actively seeking them out.

Let’s start with the negatives (so we can end on a high!)…

Typically you only get a short amount of time to play your music. This will vary, but it could be as little as twenty minutes, particularly if you’re the first of a number of other supporting acts. This isn’t a lot of time, particularly if you have travelled a long way to play the show.

Short sets can lead into the point of how this can potentially feel like a very long day. If you’re supporting a big touring band, then it’s likely that you’ll have to work around them and their time scales. This could mean that your sound check is really early in the day, which leads to a lot of hanging around at the venue. As Roddy explained, the amount of overall time it can take to ultimately play a very short set, can sometimes out way the benefit.

+4 Tips For Building More Fun Into Your Next Tour

If your support slot is local to where you live, then it might be fine as a one off gig where you’re on just after the doors have opened and there aren’t many people there. If you’ve travelled some distance, you’ve got a short set, and you’re playing to a venue that holds a few thousand people and there are only a handful of people that have taken their seat at the back, this can have a demoralising impact. This can certainly be compounded if you have bagged a support slot for a whole tour, and you have faced with the prospect of this taking place night after night.

This can go either way. From the negative side of things, Roddy explained how sometimes you could visibly see the crowd in the front row with their fingers in their ears. This can naturally be somewhat off putting and not the most motivating of experiences.

Roddy also made it clear that (as a generalisation) support slots don’t pay well. So to lay all of the above negative experiences on top of not receiving a fair level of pay, something that may have made it all worthwhile in the end, won’t necessarily be a thing to rely on.

All of the above leads to you to consider what the missed opportunity is associated to playing these types of shows where you get little out of them? Put another way, what could you have productively done and achieved with that time had you not played those shows. Perhaps not much of an issue for one off support slots, but certainly something to consider if you do a lot of them, or go on tour.

So, that’s covered many of the negatives, however the good news is that there can be a whole host on benefits associated to playing support slots…

Typically if you’re supporting a band, they’ll be more established than you are, have a bigger fan base, and potentially will be associated to a label of some kind. With that comes a whole host of things. They’ll have gig posters, media articles, tour managers and a much greater reach in terms of being able to promote the show. You also have the ability to reference you have played with this bigger act, which can gain you some increased credibility in some instances.

You can use the business term of ‘networking’, or simply refer to this as making new friends. Either way, widening the net of people that you know can be invaluable. As just one example, the tour manager of a band will likely know other tour managers, and other people in the music industry that they’ve become friends with over the years. If you strike up a relationship with that person, they may be able to put you in touch with their contacts when the time is right for you.

+How to Get Booking Agents to Notice You

Not necessarily always the case, however often a support slot can involve playing a bigger venue. To start off with, this is pretty exciting. Stepping onto a big can make you feel more like a rock star, then the tiny corner of the bar that you’ve previously been used to occupying.

This type of experience can be hugely important in preparing you for the future where those bigger stages become your ‘normal’. You instantly have more space. What are you going to do with it? Becoming comfortable in that environment and looking like it is a natural habitat for you will take time and practice.

Having referenced this in the negatives, it is important to note that this can be a huge positive. Roddy mentioned that some of the support slots Idlewild did were fantastic, particularly when they played with similar bands whose fans grew to love them as well. This can be a great way to gain new fans.

This can be a great way to see different places, cultures, people, venues, all of which you can take inspiration from to help shape your art. Whether that is new influences for a song, or something to do as part of a live set, absorbing different environments can massively help. There are going to be times where all you see is another hotel room, and don’t have time to get out into the local area, but you will always come across differences in life everywhere you go. Make the most of them.

Like many of the topics we’ve covered so far on the podcast, there is perhaps more to consider than you’d first think when deciding whether to take an offer of being a support act for another band. For one off shows, this may be less of an issue, although our episodes with Mark Duffett made clear how important it is to ensure your ideas and values align with anyone that you collaborate or associate yourself with.

There certainly appears to be lots to get out of these, so all the best to those of you who go down this path. Let us know how you get on.

Remember to give it your all."

+Music Business After Dark Ep. 2: How Do I Get Opening Slots on Tours?

+Making a Living as an Independent Artist

+16 Types of Shows We've Played on the Road

ACPG is the music podcast that interviews big name artists and industry experts going behind the scenes to explore what it takes to make it in the music industry. Enjoyed as a valuable resource for budding upcoming musicians and entertainment for music fans, season 2 of ACPG is currently enjoying success thanks to wide ranging interviews with the likes of The Killers, Jimmy Eat World and Editors covering topics from song writing to record deals, and releasing songs to music law.

All episodes are free at acpgmusic.com or wherever you get your podcasts from. Join James and Ben now and become part of the global audience regularly tuning into the show.