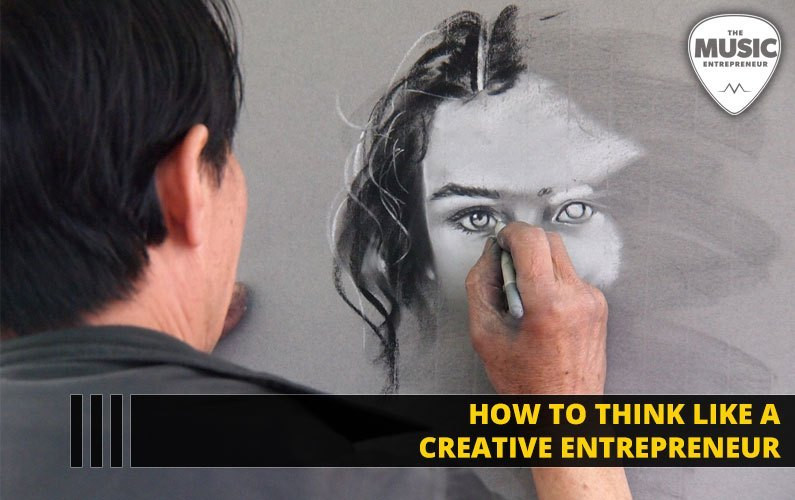 "This is what life and business strategist Tony Robbins had to say about success:

"80% of success is psychological."

Regardless of whether you buy into this notion, I think you’ll agree that your mindset will play a critical role in your longevity and ultimate success as a creative entrepreneur.

There’s a difference between how an employee thinks and how an entrepreneur thinks.

An employee works for money and other people.

An entrepreneur has money and other people work for them.

This statement changed my life.

As you’re first getting started, you will likely be doing everything yourself. And, it is a good idea to get a feel for every task that needs to be handled in your business. Being a generalist rather than a specialist can be an asset as a business owner.

But as you begin to grow your business, you’re going to want to eliminate, delegate or automate tasks that you aren’t good at or don’t enjoy. Your goal should be to work in your strength zone as much as possible and to move away from tasks that aren’t the best use of your time or energy.

Don’t be afraid to seek help. I know it can be hard, especially if you’re a perfectionist, but the reality is that you can’t do it all by yourself. You will require the help of others to build towards your goals and dreams.

The number one regret many entrepreneurs have is not hiring sooner. So, hire early and begin paying others for repetitive and mundane tasks that take away from you engaging in high-level activity.

Develop a Long-Term View of Your Career or Business

An entrepreneur always thinks long-term because they know that short-term thinking can get them into trouble.

An entrepreneur understands that it may take two, five or even 10 years to achieve their desired level of success. They understand that they will encounter challenges and obstacles on their journey. They recognize that they may need to acquire new knowledge, develop new skills and seek out the mentorship of others as they grow their business.

When we allow ourselves to think short-term, generally we make pleasure-based decisions. We seek out instant gratification and look for ways to feel good now.

This may help you generate some happiness in the immediate. But it will be fleeting.

Entrepreneurs make decisions that they know will make them happier long-term. They delay gratification. They make sacrifices now based on the overarching vision of what they know their life can be.

I’m not suggesting that you shouldn’t enjoy the journey. If the journey itself isn’t pleasurable to you, then you might be on the wrong path! You’re probably seeing your business as a means to an end rather than a value-generating machine.

Business isn’t just about the money you make and the freedom you create. It’s also about the people you impact and the difference you make in the world. It’s about the challenges you overcome, the transformation you go through as an individual and the fulfillment you derive from it.

Today, there are many entrepreneurs that make short-sighted decisions about their health and well-being. They wear long hours at the office like a badge of honor. Even if they aren’t paying a price for it now, they will later, whether it’s in the form of health challenges, relationship challenges or otherwise.

So, it’s important to identify the extremes of short-sightedness. Some people are fundamentalists. Some are slackers. Both extremes are undesirable. Let’s learn to be aggressive and sustainable at the same time.

Be Consistent & Persistent in Applying Yourself to Your Work

As a creative entrepreneur, you should understand the value of consistency.

Each year, many people set out to exercise and lose weight, write a book, learn a new skill or hobby and so on. But when push comes to shove, many don’t follow through on their goals.

First, developing a habit takes time. And, as we move towards our goals, we should be looking to adopt habits that continually move us in the direction of our chosen destination.

Second, many people fail at being consistent. They might hit the gym a few times as the New Year begins, but then they stop going. Here’s what happened  —  they didn’t develop the habit of going to the gym, so it never became a part of their routine.

But what does it mean to be consistent?

First, I’ll tell you what consistency is not:

It’s not spending 15 minutes on Monday, three hours on Tuesday, seven minutes on Wednesday, one hour on Thursday, and 20 minutes on Friday.

In that example, your average was roughly 56 minutes, right? Wrong.

As you can imagine, a higher average is more desirable, regardless of what tasks you’re engaging in.

So, determine what’s important to you. Then, start creating a routine around the key areas you’ve identified. Schedule in the activities you need to engage in every single week. Finally, follow through on the promises you’ve made to yourself.

Entrepreneurship is like skydiving without a parachute and problem solving on the way down.

Does that sound scary? It sure can be.

So, it’s important to be able to look at problems from a variety of angles and seek out solutions beyond the obvious.

In my experience, it’s hard to find expert problem-solvers. So, it’s no wonder that so many people fail in business.

Fundamentally, the job of an entrepreneur is to solve problems.

Many people think success occurs when everything is working perfectly in their lives. But the opposite is true  —  success is messy. You could even say that the more successful you are, the more fires you’ll have to put out.

I’m not talking about violating the laws of man or God. I’m talking about the things that make you uneasy, such as selling your car or home, taking out a second mortgage or other short-term lifestyle sacrifices that could help you live an amazing life in the long-term.

Entrepreneurs do what nobody’s willing to do now so they can live like nobody can later.

+Use What You Already Have to Create Great Music

This is what it all comes down to. The exact details of how you think don’t matter as much as your attitude. When your attitude is right, the facts don’t count.

So, work on your mindset. If you don’t, the slightest of problems might stop you dead in your tracks. But if you do strengthen your mindset, you’ll blow right by many obstacles that will present themselves on your journey."