Crowdfunding: Am I A Douche Bag For Doing It? 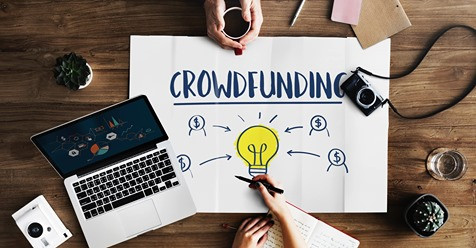 "Who hasn’t been in a situation where they could use more money? Unfortunately, musicians often don’t earn big bucks at the DIY level. It’s frustrating for the band, as well as the fans if you can’t afford to release albums and offer merch, buy a van, or have the necessities to make a solid go of it. But, are you a douche bag for using crowdfunding?

Crowdfunding is an amazing tool when used properly and to its full potential. It allows fans to be part of the creative process. Unfortunately, many bands often shy away from sites like gofundme and Kickstarter, because of the way they’ve been misused by others. Many artists fear that they’ll look like beggars or scam artists, taking advantage of people.

However, that doesn’t need to be the case. The platform can be an imaginative and effective way to connect and collaborate with your fans, making them feel like their voices are heard…IF it’s used properly. Exactly what does that mean? How does one ask people for money without sounding like a huge dick?

FIRST OF ALL, IT WORKS BEST WHEN YOU’VE ALREADY CREATED A FAN BASE TO APPROACH.

Trying it when you’re a new band without merch or other incentives to offer seldom produces results. And, with no traction, you won’t have access to many fans you can pitch it to. I mean, you can ask your mom for money without doing a Kickstarter. Here are some tips to help you succeed:

I USED TO THINK THESE THINGS WERE BEGGING AND POOR FORM.

But a friend gave me his take after they tried it, and that changed my perspective. The reality is that, if you make it more of a collaboration than just a plea for money, your fans will respond positively. My band raised funds this way, setting our goal for $2500 to press CDs and vinyl. We planned to invest our own money for the other expenses, but the campaign did SO well that we not only could pay the entire cost for CDs and vinyl, we ordered stickers and posters too, and we gave them free to all the people who participated. In addition, we did a free show with discounted merch, to thank those who helped.

+Do You Know What Your Fans Really Want?

I WENT FROM BEING DEAD SET AGAINST CROWDFUNDING, TO BE ALL FOR IT.

It’s all in your delivery. So next time you’ in a situation where crowdfunding could help, use the opportunity to involve your fans and treat them as partners with the band, rather than nobodies at shows. The more they identify with you and feel like peers, the more die-hard fans they will become."

+How to Promote your Music with a Call-to-Action

Tom is the singer/guitar player for the death blues band, 20 Watt Tombstone. 20 Watt Tombstone is an internationally touring band based out of Northern WI. They tour consistently with hundreds of dates per year. They have hundreds of thousands of streams on Spotify, and a prominent following on social media. Tom is also endorsed by several manufacturers including Orange Amps, and Gretsch Guitars. Check out their website for more info: http://20watttombstone.com