5 Reasons You Should Release Music On Vinyl Records 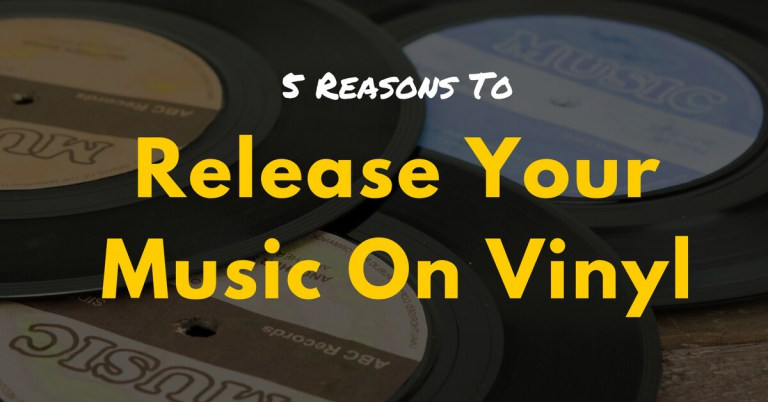 It was unthinkable toward the end of the Nineties, but what 21st century music fans needed in their lives was an old-fashioned twist in the form of vinyl records.

Technology has gone backwards as vinyl muscles its way in on the charts.

Let’s find out whether vinyl is purely a nostalgic phase or worth the investment.

New artists are releasing their work on old school records with that unmistakable pop and hiss. And the format will always stay on the cutting edge thanks to DJs belting out tunes on the decks in clubs.

Vinyl is back on the (turn)table as a means for new artists to get their musical message out there. And vinyl record shops and online stores are even making a revival.

But if you’re an up ‘n comer is it worth putting your needle on the groove, when there are cheaper and easier options at your fingertips?

Let’s take a spin around this complex issue…

Here are 5 reasons to release music on vinyl records…

1. There’s something in the sound?

Though it’s outdated compared to modern recording techniques, people clearly love what vinyl releases bring to the party. Digital sounds cleaner, but the debate rages about whether vinyl’s analog experience is better.

+5 Reasons Why Vinyl Is Definitely Better

What streaming and downloads can’t match is the emotional connection that human beings feel toward this most physical of formats.

It may seem completely maddening and illogical to some, but for many enthusiasts, vinyl goes beyond getting a music fix.

Music enthusiasts can sometimes be obsessive types, and it has even been reported that "Moby compares the ‘warmth’ of vinyl to mother-child bond”.

Now: We can’t rely on there being a sufficient number of Moby’s out there to warrant going head first into releasing on vinyl.

But, here’s the thing:

There is undeniably, the ‘hands on’ dimension to having a vinyl release in your home, of keeping it on a shelf, of maintaining it and your equipment so it always plays at optimum quality.

Then you have the decades of devotion to that shiny black disc and its often bold sleeve designs.

Happy memories of families putting a record on and the warmth associated with that scratchy sound-scape. These are all factors that could ultimately lead to somebody buying your music on vinyl.

Have you ever wondered:

Why do people get a glazed look when they put on a record?

Pressing on to vinyl means you become part of a worldwide ritual with a loyal following. You might be told that your stuff sounds more organic. And whether you think that this is a load of bull or not, in a sense perhaps you will be surprised at the feel of craftsmanship and sensation of having your music on a physical format that has its history tied to the early days of music making.

Vinyl can give new artists an enormous sense of achievement that’s little to do with fame or racking up sales. It’s arguably an artist’s medium.

It is super easy to release your music digitally worldwide on every platform known to man. When something is super easy, everybody can do it and everybody does. With vinyl, it is getting way easier but there are still a few hurdles.

That is a good thing if you are an artist willing to make the investment. Here’s why…

It means there are a lot fewer releases for vinyl fans to choose from. Instead of there being thousands of rock, country, hip hop, etc releases each week on digital, there may only be a handful on vinyl.

You are more likely to be featured and get more eyeballs on your music.

+How To Screw Up Your Gig Before You Even Show Up.

What about the cost?

So far, so warm ‘n cuddly. The whole deal comes with a price tag, however. Rough estimates of what it costs to record an album on a disc, never mind getting it distributed, can run into the thousands.

There are, however, ways of minimizing the costs of vinyl pressing, since:

“Your Cost Will Be Impacted by Number, Color and Thickness”.

Choose white labels and record sleeves, and only get a couple of records pressed.

And, there are also circumstances, in which you can have those production costs covered by certain providers, which reduces the strain on your wallet considerably.

You’re going to have to deal with distributors, and they deal with labels.

But here’s the thing:

It’s quite easy to start up your own record label. Starting a label is pretty much the same process as starting a company – choose a name and register the business!

Do your research and don’t waste money by sending your test pressings to distributors that won’t be interested in your music."

+Do You Know What Your Fans Really Want?