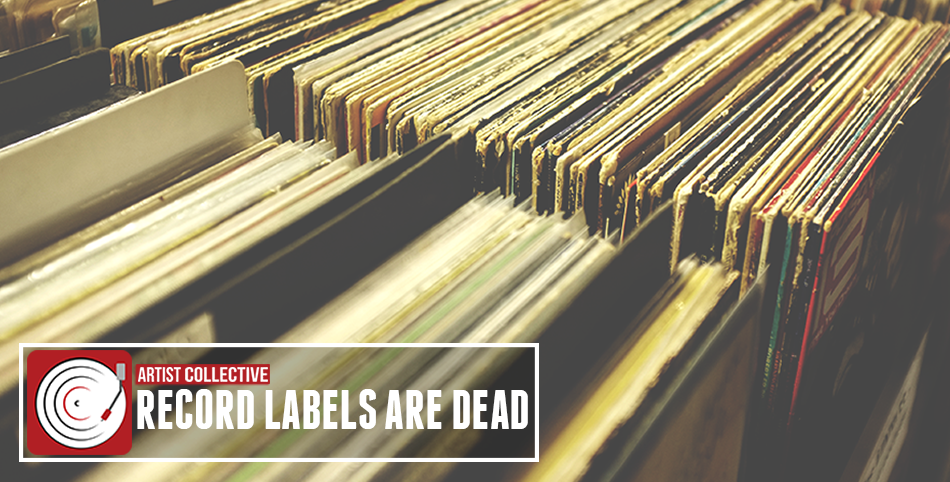 "For ages, there’s been a cliché dream for any would-be musician. It starts with some huge opportunity, playing a new stage. Scouts are in the audience. Your nerves are tingling with the promise of potential. Italian suit clad representatives from record labels are waiting in the outskirts of the pit. You shake the nerves as you’re announced and walk out to the stage front. Sputtering out an appreciative blurb to the crowd, you launch into your first song and click into place. You flow with the music and wow the audience and agents alike. You’re immediately bombarded by these different suits throwing you offers from every record label you could think of, and finally, you’ve made it. You’re “signed.”

I have bad news about this picturesque dream. It’s all bullshit. Movies and television have portrayed this as the way that you “make it.” Are there exceptions?—of course there are—but the idea of getting signed is as dated as an 8-track player. Plain and simple, record labels were at one time the pinnacle of musical success. There just happens to be a wonderful invention that has made record deals completely obsolete. That invention is the internet.

In the 1970’s, record labels ruled supreme. They used all sorts of manipulative maneuvers to get their music on the radio. According to “Hit Men: Power Brokers and Fast Money Inside the Music Business” there were pseudo-gangs on payroll for almost every label that would coerce disc jockeys to play whatever tunes the labels chose. Greed, egos, violence, and mafia tactics from these self-proclaimed “Indies”secretly carved the industry into what it is today. There are hundreds of horror stories of these musical mobsters terrorizing radio stations, their families and friends simply to guarantee they controlled the airwaves. Eventually, with the creation of the internet and the help of a brave band named Pink Floyd, these flunkies have lost most of their power. However, the aggressive strategies of these labels remain the same.

There were quite a few things record labels did for an artist. They would help you find musicians and studios to record your music. They would enlist producers or co-writers to polish your product before putting it to wax. Also, labels would finance the projects, generally indebting the artist. This is often the biggest hurdle for an up-and-coming artist, but rather than owing your fortune to a label, there are hundreds of ways to finance your album. Once the project was completed, they would manage your image, package your product, and prepare it to sell. They would then distribute the album to various vendors and cross their fingers that they saw a return.

When I see that list, I think to myself, “I don’t see one single thing I can’t do myself.”

Given that I am a Project Manager for Artist Collective, I’ve learned and have acquired hundreds of hours of knowledge on how to do all of these things. However, let’s simulate how an Indie artist might do all of these things. Let’s call the artist “Q The Dude.” Q is an R&B singer/rapper from New Orleans trying to put together a debut album. He finds artists and a studio (and an in-house producer),through various online musicians’ classifieds. Rather than owing insane returns to the label, he uses Kickstarter to crowd-fund his project, giving friends, family,and fans fun incentives to donate. Using a management company (like Artist Collective), he affordably puts together an online promotion program, distribution system, and creates an online marketplace to allow fans to buy directly from him. This way, he’s in no debt, has full control over his own image and artistry, and has signed nothing that would hurt his career in the long run.

I speak of debt from experience in the industry. I’ve been tied up in contracts with reality shows and companies for years, not allowing me to brand myself as I please. A musical colleague of mine even told me how he was forced into selling his catchiest song to a big time artist. All to pay his growing debt to the label that had so hastily signed him. That song ended up winning a Grammy for said artist, and he barely broke even as the band was dropped from the label. I urge artists to take this musical journey on their own and sign as little as possible along the way because of due to stories like this.

All in all, the internet has opened any artist to a worldwide fan base with infinite ways to promote, create, discover, and distribute your music. And for those artists that don’t have the time or desire to do these meticulous but necessary tasks themselves, music companies like Artist Collective exist. We can cater to every aspect of your musical journey for pennies compared to what a label would charge. Control your career and carve your path in the musical world effectively and independently. We’re here to help. To learn more or submit your music to us, CLICK HERE"

+Playlisting and How Indie Artists Should be Using it