Recording At Home: Taking A Song From Demo To #1 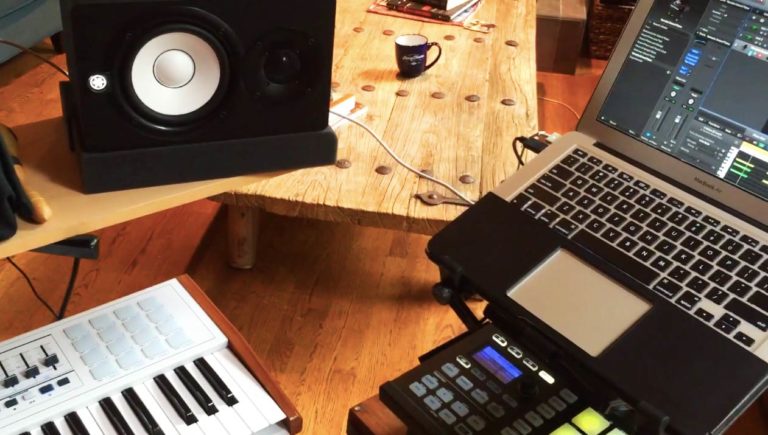 "People often ask me if they have to do full-production demos to present songs to publishers or major artist? I do a fair amount of full demos, but I also have had about half of my major cuts from pitching home demos done on a very basic set-up on my mac laptop.

The Home Recording Gear I Used…

Let’s break down the process and equipment I used on my simple home demo of “Don’t Think I Don’t Think About It” (The first #1 hit for country artist Darius Rucker). First let’s look at the gear I used:

So you can see for the price of a couple demos, I had a complete recording studio with everything I needed. After writing the song I decided to make a simple guitar/vocal demo to send to Darius’s manager. First, I recorded two strumming acoustic guitar tracks with the mic pointed straight-on to the neck of the guitar guitar (where the neck meets the body). Just about 4-5 inches away from guitar. I then panned them hard left and right in the mix to create a full sound and leave lots of space in the center of the track for the vocal.

Next I recorded my vocal. I usually record my vocal about 6 inches away from the mic for loud sections like a chorus, and move up closer to the mic for more intimate sections like verses. After I felt I had a good vocal performance, I recorded to background vocal tracks. One part above the lead vocal and one part below. Again I panned these left and right but around 2 o’clock and 10 o’clock, leaving the center of the mix for the important lead vocal.

Finally, with the recording process complete, I added a “chorus effect” to one of the acoustic guitars and a touch of reverb to the vocal. All this done with the Apollo Twin plugins which are amazing sounding plugs.

After a quick mix-down, I sent an email over to Darius’s manager with the recording. I didn’t hear anything back and figured the song was dead in the water. But 2 months later the manager passed the song along to Frank Rogers (Darius’s producer) and the rest was history.

So, as you can see, with an investment of what you would spend on two full demos, you can have your own pro sounding set-up at home.

+The 5 Types Of Studio Time

+5 Things Songwriters Need to Know About the Consent Decree

Clay Mills is a 16-time ASCAP hit songwriter, producer, and performer. His songs have been recorded by such artist as Lady Antebellum, Darius Rucker, Babyface, and Kimberly Locke. He has 2 Grammy nominations for “Beautiful Mess” by Diamond Rio and “Heaven Heartache” by Trisha Yearwood. Follow him here: www.songtown.com, at www.claymills.com.