Life and Times of the 100 Greatest Artists 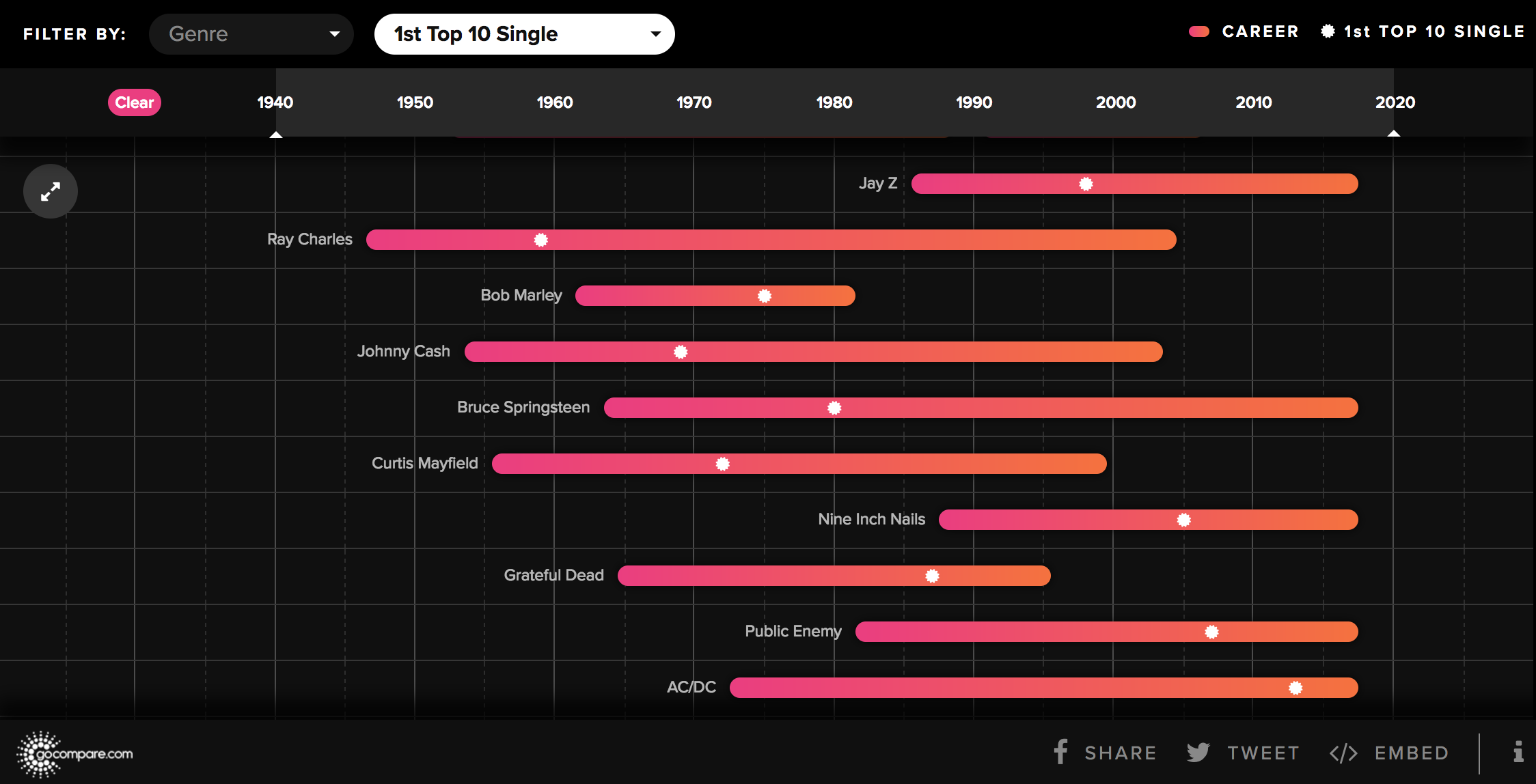 "Every musician takes inspiration from their heroes – modern pop music owes a debt of gratitude to the Beatles and Elvis Presley, while the lineage of hip-hop runs from 1970s New York acts like Afrika Bambaataa and Kool Herc to modern stars like Drake and Kendrick Lamar. But how much do you know about the careers of the legendary artists that have paved the way? And what can the musicians of today learn from them? A new interactive visualisation from Gocompare.com enables us to look back through history and come up with a few tips that might help you make it to the big time.

You’d be surprised at how long it took some world-famous acts to make a hit record – legendary Australian rockers AC/DC started out in 1973 but didn’t reach the top 10 of the US or UK charts until ‘Highway To Hell’ a full 40 years later, while influential rap group Public Enemy took until 2007 to record a big-selling single – despite recording a number of critically-acclaimed albums throughout the 1980s and 90s. So keep plugging away during the early years – you never know what’s just around the corner.

…or even if it never comes!

In fact, you might not even need to have a hit single at all. Of Rolling Stone’s top 100 artists of all time, nine never managed a top 10 hit at all; blues royalty Bo Diddley made it into the Rock and Roll Hall of Fame, but went his entire 60-year career without troubling the business end of the charts. As long as you dedicate yourself to your craft and have a strong work ethic, you could have a long and successful career without worrying about worldwide fame and fortune.

The visualisation also shows that a short career is no obstacle to huge success. While the likes of Frank Zappa, Chuck Berry and Stevie Wonder kept themselves current for decades, there are plenty of other artists who achieved their goals in a much shorter space of time. The original rock supergroup Cream formed, released three albums (including hit single ‘Sunshine of Your Love’ and disbanded in the space of two years, while Creedence Clearwater Revival fit a lifetime’s work into just five years, releasing seven full albums between 1967 and 1972. As rock legend Neil Young once said, ‘it’s better to burn out than to fade away.’

If success is the goal, choose your route carefully

If you’ve always dreamed of being a star, you might want to consider which path you take – depending on which genre you work in, your road to glory could be long or short. Pop and rock acts tend to go stratospheric more quickly. The Kinks, The Who and Led Zeppelin all had a top 10 single in their first two years – while artists from historically less mainstream genres such as rap, metal and reggae have taken longer to reach worldwide fame. Eminem, Bob Marley and Metallica are three of the most recognisable names in music, yet each took more than a decade to trouble the charts, while Bruce Springsteen and James Brown took longer still; maybe it’s something about the nickname ‘the Boss’!

You can explore the careers of the greatest artists visualised for yourself here."