"Making a living as a performer, band, or songwriter relies on one major factor: finding your audience.

Today a great bulk of “audience finding” happens online, amidst the rapidly evolving mechanics of social media. Whether you regard the pervasiveness of social media as a positive or a negative thing, social media is a tool that you can utilize to get heard.

In this post I’ll explain how to get the most out of Facebook, but first, a little history.

From 2006 to 2009, Facebook utilized a reverse chronological newsfeed, which means that when you posted something it would appear on the top of the news feed and move down as others posted. Pretty cool if you’re trying to advertise your new album or concert because all of your fans will see it, but not-so-cool because scrolling past Jason Mraz and Radiohead covers is making your fingers tired.

In 2009, Facebook began to prioritize popular posts, and quantify popularity by engagement. So, now your shameless plug for your Friday night show isn’t reaching nearly as many people organically, but you’re also a little less annoyed by other people’s self-promotion too.

In 2015 Facebook surveyed 500,000 users and found that the vast majority preferred to see posts from friends and family as opposed to promotional posts. In response, Facebook began to eliminate organic posts that used similar language to that used in ads.

+For Better or Worse: Putting Facebook to Work For Event Marketing

In order to remain relevant as a platform, Facebook must hold people’s attention. To that end, Facebook aims to show users posts they are actually interested in. Currently, Facebook bases their assessment of relevance on user interest in the creator of the post, the post’s performance among other users, past content performance from the creator, the type of post the user prefers, and how recent the post is. Both your paid and unpaid posts will proliferate more widely based on their relevance.

Facebook’s overarching vision is to show users what they want to see. To engage people using Facebook you need to try to understand which group or groups of people your work will be most relevant to, and get in your work in front of those groups. If your promoted post is highly relevant to the people who are seeing it, then Facebook will charge much less to show it to them.

To build your audience, you’ll need to promote posts on Facebook and experiment with your content and audience. As a musician, I’ve never had a huge ad budget, so I understand that getting the most for your money is critical.

How can you do it?

Let’s say you receive a nice album review in the Des Moines Register ahead of your Des Moines tour date. Post the link, and promote the post to those interested in the Des Moines Register who also live in Des Moines. By targeting fans of the publication you’ll get a higher relevance score and lower cost per click, because people who are interested in the publication will find the article more relevant than the average person in the area. 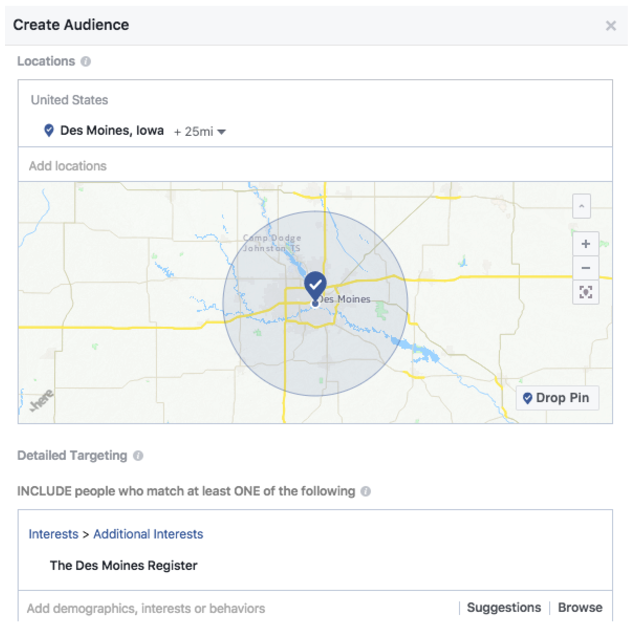 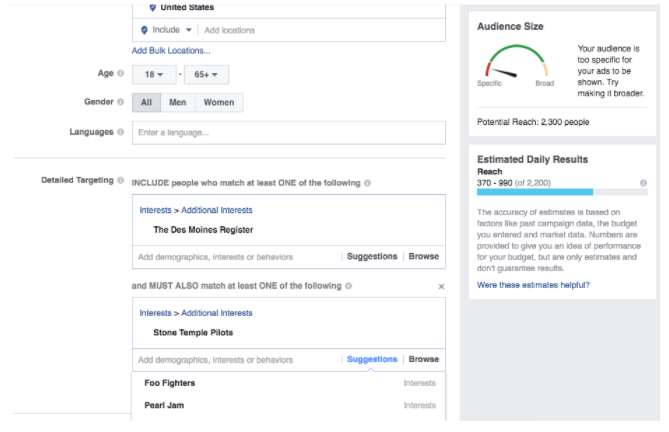 Or maybe you have a great cover video of a Tame Impala song. After getting some organic views, and boosting to get a solid views count on the video, try running an ad targeting people who are interested in Tame Impala on Facebook. If you’re playing a show in a new city, run an ad with your cover video to Tame Impala fans in that specific location. Facebook wants to show people what they want to see, and high relevance means a lower cost per click, more engagement and more people at your show.

+Is Posting Covers On YouTube The BEST Use Of Your Time?

Whenever possible refine your target groups to a small size: 1,000 people or less. This will ensure a low cost per campaign, since you’re only paying to reach exactly the people you want to reach. Keep an eye on your post analytics, and when a video or song is engaging people very well, then put money behind it to build your fanbase. Test multiple ideas and run with the option that performs best.

Your real challenge is the same as it always has been: find your true voice and create engaging art. Your most engaging work will travel the furthest.

Hopefully this article has helped you understand how to use Facebook as a tool to get more people hearing your music.

Take it a step further:

1. Videos travel well, so put effort into making great videos, and don’t be afraid to mix in some Facebook live.

2. Create multiple ad concepts and run them against each other at $1 per day. Continually reiterate and re-examine your data to find your winners. Taking more shots increases your chances of putting some in the net. Keep experimenting.

3. Check out the Facebook Blueprint courses to up your FB marketing game. They’re easily digestible modules and they’re free.

For more up-to-date techniques and tools that will help you improve your efforts online and get your music heard, follow my Facebook page."

+If You Aren't Using Facebook Video You Will Miss Out