“Musicians: Get a REAL Job!”

**Guest post written by Wade Sutton of Rocket to the Stars. 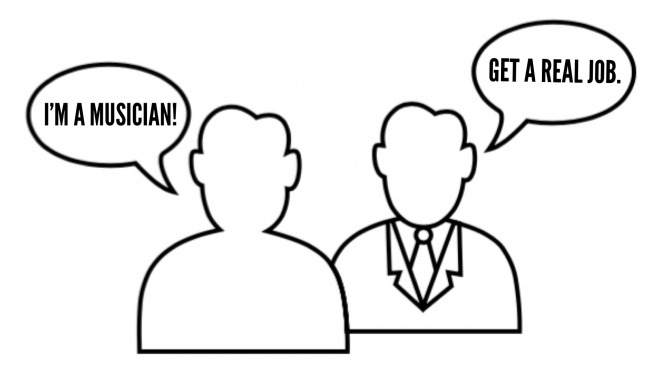 "This is a very personal article.

I’ve been blessed with working with independent artists from all over the world for the past couple of years. I’ve helped artists hone their live performance skills and produced their live shows. I have written biographies and press releases, designed websites and press kits, and consulted on music business matters for artists in cities like Nashville, LA, Austin, Toronto, London, and Sydney.

I’ve also found myself, from time to time, serving as a pseudo-therapist for artists struggling emotionally when somebody close to them suggests their love for music is nothing more than a hobby and that the artist should consider a more traditional type of employment.

In my time working in the music industry, not to mention when I was making the transition from my former career in radio to my current work, I not once had somebody make that kind of comment to me regarding what I now do for a living.

Until a couple of weeks ago…and it happened in one of the worst possible settings.

Some quick backstory to put this into context. Stick with me. You’ll be glad you did.

In addition to working in the music industry, I am also a full-time single dad of a nine-year-old daughter. There is no need to go into all of the dirty details other than to say that I recently filed for a modification to the amount of child support my ex-wife pays me each month to help with the care and raising of our daughter. That meant having a conference so domestic relations could examine whether an increase should be ordered.

It was during THAT conference that I found my career in music being belittled and bashed by the attorney representing my daughter’s mother.

“What he is doing is basically nothing more than playing. It is some kind of fantasy somebody pursues when they are young instead of going out and looking for a real job.”

Yea. He said that.

I suddenly understood fully why this kind of comment rocks so many artists from musicians to painters to photographers to writers. And, mind you, this conference was to determine how much money SHE pays ME for child support…not vice versa.

I like to think I have achieved a pretty wonderful level of success doing what I do. I have an amazing network of people in the music industry sending me clients. Some of them include Rick Barker (Taylor Swift’s former manager and consultant to Big Machine and Live Nation), and Dave Kusek (founder of the online music education program at Berklee College of Music), as well as producers, songwriters, and voice instructors from around the country.

Not to mention I have testimonials from people like Clay Mills (co-founder of Songtown and ten-time ASCAP award winning songwriter) and Kevin Andrews (professional movement coach and co-choreographer for Dancing With The Stars). This is all in addition to the followers I have picked up on my own through writing articles like this one and artists I have met speaking at workshops and conferences.

+Why Bands Need to Stop Bitching

So when I found the legitimacy of the type of work I do coming under attack, I couldn’t help but be a bit irritated.

WHY PEOPLE DON’T SEE IT AS A REAL JOB

The first thing you have to do when somebody suggests a life in music isn’t a real job is understand something very important: Artists, by their very nature, are creative people who see things abstractly and desire to live “outside the box.” That puts you in the minority compared to those spending their lives getting up every morning, punching a time card, and having a paycheck signed by a boss and put into their hands every two weeks.

Those people are institutionalized. If they lose their job today, the first thing they will do when they wake up tomorrow is go look for another job. They find comfort and safety in that repetitive structure. They need it. It makes sense to them. It is safe.

Artists making a living solely from their art are just the opposite. You don’t clock in. You don’t have a steady paycheck. You don’t have somebody looking over your shoulder to check your progress. Just the thought of being subjected to that rigidness on a daily basis is enough to make most creative types want to take a long walk off a short pier That kind of environment is suffocating.

What I’m wanting you, the artist, to understand is that it isn’t YOUR fault that those people don’t see professional music and song writing as a real job.

It is THEIR fault.

Because when the day is over, their perception of what you do has ZERO impact on how you write your songs, sing your lyrics, perform during your show, book upcoming gigs, or interact with your fans.

+Smash any goal for 2015 using the Seinfield Strategy

We have a selection of cities throughout the world in which this whole idea of being a full-time musician is something that is actually looked upon as a viable career choice. The problem is most of you don’t live in Nashville, Austin, New York, Seattle, or one of those other blessed metropolises.

If you live in a smaller community, you cannot possibly expect everybody around you to wrap their heads around how music is a viable career choice. It just isn’t going to happen. They won’t “get it” because it’s so far from the perceived normal for that area.

Need an example? I live in a small town about halfway between Pittsburgh and Cleveland. Two of the biggest employers in my county are the local hospital and WalMart. Music isn’t even on the map. When I try to explain to people what I do for a living, they look at me like I just dropped an anvil on their head. My own mother can’t even explain what I do.

That’s why I made a decision a while back to NOT attempt to get people to understand. When they ask what I do, I simply tell them I work in the music industry utilizing the Internet and Skype and leave it at that. I don’t need them to understand; I only need my clients and associates in the industry to know what I do. It makes life for me so much easier.

Can’t bring yourself to NOT care what people in your small corner of the world think?

Then pack up your s*%t and move.

No excuses about money, school, work, and all of the other reasons most artists come up with. Just pack up your s*%t and move and figure it out when you get there. You would be shocked by what you can accomplish when you are thrown into survival mode.

Go to a place where you can surround yourself with people like you. Other musicians and songwriters. Find people working at a speed and pace faster than your own so you push yourself to keep getting better and better.

+Build a Fan Base in Your Hometown First

Screw those naysayers back in Podunktown, USA when they suggest you need to get a “real job” as they drag their asses into work every Monday morning complaining about their boss giving them grief, get stuck working mandatory overtime, and turn into some of the most jaded and miserable people walking the face of the planet.

I CAN’T STRESS THIS ENOUGH

Your success in turning your music into a career has absolutely, positively NOTHING to do with people’s perception of whether music is something you can do for a living. The people who tell you music isn’t a “real job” are the same know-it-alls who insist on giving business advice to young entrepreneurs even though they have never run a business a day in their lives!!!

The only power their statements have over you and what you do with your life in music is the power you surrender to them. Pull up your big boy or big girl pants and tune them out.

And be a bad-ass at everything you do."

+Musings From The Tail

+How To Improve At Speaking Between Songs

+The New Music Business: Easier Than You Think?

Between co-authoring “The $150,000 Music Degree” with former Taylor Swift manager Rick Barker and working one-on-one with artists around the world via Skype, Rocket to the Stars’ Wade Sutton has dedicated his life to helping artists ditch their day jobs in favor of careers in music.

Serving as a live music producer and performance coach, Wade teaches singers and musicians how to turn their live shows into a kick-ass experience resulting in fans buying more merchandise and increasing e-mail sign-ups.

He also puts to use nearly twenty years of professional journalism experience by creating biographies and electronic press kits for singers and musicians while advising them on matters related to the media, public relations, and obtaining sponsorships.

His articles and videos on the development of independent artists have been featured on some of the most popular indie music websites, including CD Baby, Music Clout, and many others.

You can receive a free digital copy of Wade’s book at www.RockettotheStars.com.