How I Double My Gig Money With Merchandise Sales 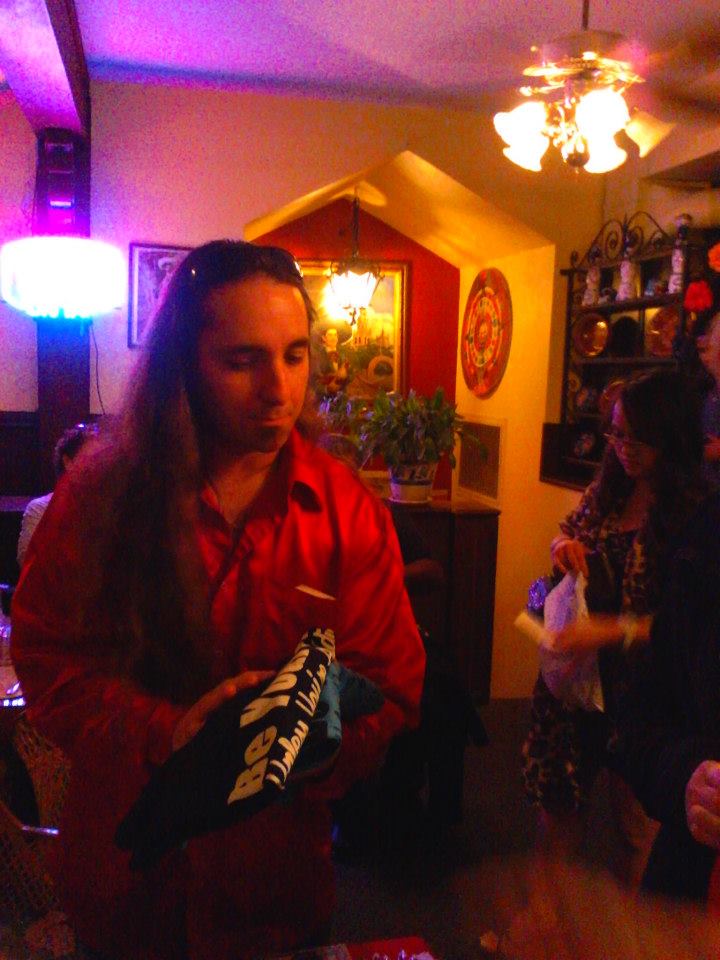 "I just finished a show where I doubled my take for the night on merchandise sales. I’m not getting rich off it, but I can usually do that or better on about 75% of my gigs. Tonight I was getting $250 for the show and sold $266 worth of merchandise. Not bad for a redneck bar in a town of only 1200 people. :)

So let me tell you my strategy for this. Just like on the internet, content is king. The more the better. Your goal should be to have a merch option for everybody that wants to take a souvenir home. And make no mistake, that’s what it is. A souvenir. They may or may not get around to ever listening to your CD. Some do, some don’t. But it’s a cool autographed thingie from a fun night out.

Two things happen when you have different price levels to catch as many people as possible. You’ll get the people who spent most of their money on beer already with a low cost option. And you’ll get the people with money to spend more because they want more than one thing.

My basic options are a $20 DVD, a $15 t-shirt, and a name your own price CD. I sell more of the t-shirts than anything. Both because it’s the middle price point and because people like funny t-shirts. Most comedians are good at this. Note to bands: Most people don’t really care to have a t-shirt of a band that nobody else has heard of unless they’re hipsters or tastemakers. A shirt that has a funny saying or a interesting picture will go a long way to building your bank account. We sold very few “Roadside Attraction” t-shirts. But I’ve sold a ton of my “Be Yourself… Unless You’re An Idiot” shirts. Which, of course, also have my name and web URL on them. My friend Chris Valenti has sold a bazillion of his “Emotional Wreck” shirts.

The CD is a “greatest hits” disc that compiles stuff from my first 5 releases. It’s essentially the sampler of my catalog. There are a couple common fears with doing the “name your price” model. First is that you’ll get just a buck or two and lose money on the disc. Second is that you may believe it will cheapen the music or look desperate.

The easy fix for both of those is making sure that you have other stuff for sale at fixed prices. Then make it clear during your merch pitch from the stage that it’s important to you that everyone be able to take something home with them even if they don’t have a lot of money. Now you’re doing them a favor. And the people that have money will pick up the fixed price stuff.

Don’t worry about getting stiffed. I average $6 per CD. My cost for packaging and duplication is about 50 cents. So that other $5.50 is for all my hard work writing and recording the pieces. Yes, you’ll get people who only offer you a dollar. Don’t turn them down. Happily autograph it for them just like everyone else. The guy behind him has a ten in his hand to make up for it.

Often people will ask me what they should pay for it. I tell them I’ve gotten everything from $80 to $1 (which is true). Most everyone will fall into the $5-$10 range.

Incidentally, this same pricing model has not worked as well for me online, but that’s a subject for a different article.

I don’t sell as many of the DVDs as the other stuff. They’re the highest priced and people don’t think they’ll get around to watching it. But what does get them to sell is that it’s a two-disc set. The DVD and the audio soundtrack on CD. Rather than packaging them separately and making them choose, put it all together and make the choice easy. Plus you save a ton of money on packaging and duplication costs.

I push just 3 items from the stage, my latest DVD, the shirt, and the hits CD. But I also have other stuff at my table. A couple other CDs (fixed price) and two other DVDs. Because I don’t mention them from the stage, I don’t sell nearly as many. But some people will want to buy the whole collection right then.

What to do if you don’t have that much material? Maybe you’ve got just your one CD out? Sell the album for a fixed price. Then do a sampler that has 3-5 tracks from your album and maybe some live tracks, b-sides, covers, interviews, or whatever else you want to throw on there. Make that the name your own price disc. For a higher priced thing, you can do a package. Say you’ve got a $10 CD and a $15 shirt. Do a package that includes both for $20. Your goal isn’t necessarily to get more people to buy, but to get the people that like you to buy more.

Do a DVD if you can. They’re not that difficult these days. I’ll do a more complete article on this another time. But essentially, do 2-3 cameras. Rent an extra if you only have one. Get a couple mics up to catch audience response, and pull a sound feed from the board. My two standup DVDs were done for $300-500 each. Of course I did a lot of the work on my own for those, even editing the second one myself. My other DVD was with my full band, 6 camera shoot, lighting, and surround sound mix. That one cost $7000 to do.

Your pitch from the stage is really super extra important. I used to work with a singer that refused to pitch merch on stage because he thought it cheapened us. Horseshit. It can be done nicely. The audience knows you have to make a living.

+You're Talented. How Come You're Still Broke?

For music artists, you can pitch a few times during the show. As in, “This next song is from my new album called ‘Ooh Baby, There’s A Foot In Your Mouth’. I’ll have them at the merch table after the show and you need to get one.”

Comedians don’t get to pitch as much because we need to keep the flow of laughs going or the club owner gets pissy. Comics will usually pitch toward the end of the show. But don’t wait until after your closer and try to yell “I have CDs for sale!” over your applause. Do it before your last bit.

Write some jokes about your merch so you’ve got some laughs in there. I learned how to pitch merch from watching Jen Kober. She doesn’t pitch as much stuff anymore, but back in the day she was moving mountains of merch every night. She got applause breaks during her merch pitch! Brilliant.

Show the merch on stage. Showing it to the audience makes it real. Especially with comics. A lot of audiences won’t believe you have merch because so many comics make the joke, “I have CDs for sale after show. I’ve got like… Hall and Oats Greatest Hits, Meatloaf’s Bat Out Of Hell…” (Please stop doing that joke… Please.)

At that point in the show I ask the audience, “Have you guys had fun tonight?” To which they heartily respond, “Oh yes, quite enjoyable, thank you.” But usually with more screaming and woo-hoo’ing. That puts the word “yes” in their head just as you’re getting ready to pitch.

Then I talk briefly about each of the three items, making jokes about each. I tell them I accept credit cards. And I tell them how to find me online. Takes 2-3 minutes and the laughs keep going. Always be entertaining. From there, you go into your last bit or song.

For me, my last song is called “Buy My Shit”. You don’t have to go quite that far, but it’s damn effective. :) But you do need to make it very obvious that you have merch to sell. The drunker they are, the more obvious you need to be.

One last thing, it’s super easy to take credit cards now. There’s no excuse not to. Both Square and PayPal offer card readers that plug into your smartphone. The reader is free, there’s no monthly charge, and they take a tiny percentage of each sale. Totally worth it. Especially right now when it’s still kind of new. People get excited about signing their name on your phone with their finger.

It’s now 1am in this little Idaho hotel room, so I’m going to wrap this up. Have you got a good merch strategy or item that’s working well for you? Share the knowledge in a comment below!

Hacking your way through the jungle of music and marketing? Me too. Come on by www.BigWhizBang.com for up to date info on exactly what's working (or not) for me right now. It might work for you too. At the very least you might have a laugh at my slogan."

+How to Increase Merch Sales

+WARNING: Only Read If The Venue You're Playing Sells Food.