Indie Musicians: 5 Reasons Why AI Is Not a Threat 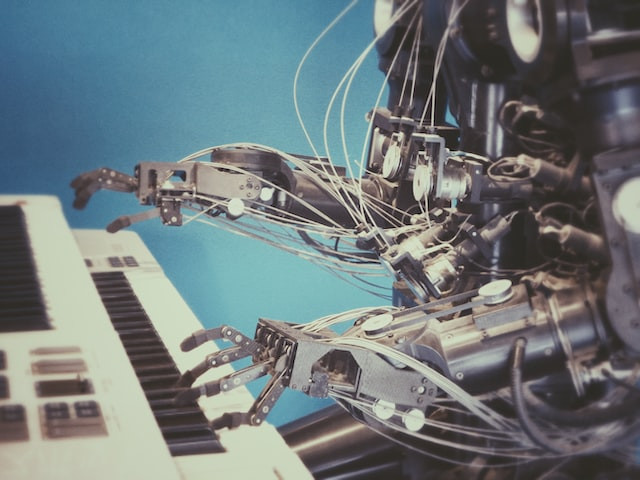 "If you are a human living on the planet Earth, it is inevitable that you have heard about how Artificial Intelligence is becoming every day more potent.

Advancements that took us decades, now are deemed obsolete in a matter of months, if not weeks.

One of the main concerns this brings along is that machines are starting to be way better than us for a lot of jobs.

And indie musicians, particularly, are surely not out of the scope of automation.

+How to Stay In the Music Industry Despite Turbulent Times

Hello, I’m Ramiro a musician and the founder of GearAficionado, an online magazine about music.

My academic background, rather than music is in Applied Economics, and I particularly took an interest in this topic for my master’s thesis.

I discussed the effects of AI on musician jobs a bit deeper on my website.

However, today I will bring some peace of mind to those that are starting to worry about our robot overlords taking over, in a more expedited form.

Here are the 5 reasons that make me believe that AI will not be a threat to musician jobs:

1. Automation is yet to be a job killer

Here’s a hard fact: Until we figure out generalized artificial intelligence (something indistinguishable from a human mind) we can only automate tasks and not jobs.

Given that that concept is still a few years down the road, and it will flip our society upside down in a way we can’t even begin to fathom, let’s let it aside.

I will focus on narrow artificial intelligences that are trained to perform certain tasks even better than humans.

And these kinds of computer minds have been around for decades and we still (sadly) have to be there for our 9 to 5s.

The thing is, automation, whether through artificial intelligence or just any other mechanism, such as the steam machine, was never really harmful to the overall number of jobs in the global economy.

2. It’s ok to delegate tasks to a robot

As I mentioned earlier, automation has not yet been able to replace jobs at a great scale.

You see, a job is nothing more than a group of tasks a person performs.

A machine can surely take over and do some of these tasks faster and better, but there will still be some at which a human will be way better.

+Top 3 Types of Music Teams to Grow Your Business

Think, for example, you are hired to compose the music for a short film.

Now, let’s say there’s a new AI that can create different arrangements for a given melody with just a few clicks.

Would that be bad or cheating?

I think not. Not even from an arranger’s perspective.

First of all: Computers are still not that great at composing memorable melodies, so here’s where human creativity can’t be matched.

Secondly, the ability to auto-generate new arrangements as if you were rolling a die will not only make the process faster but also could enhance your creativity by inspiring you with new ideas.

Finally, from the arranger’s perspective, such a technology could be scary at first contact, however, I think the human touch will still be valuable for the audience.

And perhaps, you can think of this supposed arranging AI as a mech suit in which the arranger jumps in and has all of his abilities magnified, while still being the one pulling the levers.

The only thing that automation or computerization has done for our society since it was first implemented was to boost our productivity.

And increases in productivity are what ultimately create wealth.

You can define productivity as the ratio of inputs to a certain output.

The higher the productivity, the lesser inputs you require to get something on the other side of the process.

Automation, for musicians, can only make our jobs easier and allow us to be way more prolific in what we do.

Think of an AI that can spin dozen of basic beats with just a few clicks.

Beats that you can then compare, and only keep the best ones, over which you could then improve upon.

This is just an example, and others might include auto-mixing or mastering algorithms, chord recognition software, music transcribers, and even automated social media tools to improve your marketing efforts.

+How Artificial Intelligence Can Make You A Better & More Efficient Musician

Creative destruction is a concept crafted by the economist Joseph Schumpeter.

It refers to the idea of a new production process that boosts productivity in a way that ends up destroying the old way of doing things.

But that destruction is not necessarily a bad thing, because the increased productivity assures that there will be more wealth to distribute.

A clear example of this is what happened with bank tellers when the ATM machine was implemented.

At first, people were worried that banks will start massive layoffs since a big proportion of their workforce was comprised of workers doing this job.

The end result was that, in a few years, the effect was the opposite of what intuition suggested.

Banks ended up opening new job offerings, because their overall business increased, since their employees were more productive, because of not having to deal with taking and withdrawing deposits on a daily basis, and could focus on other areas.

I believe that after all is said and done, what will end up happening (because it’s already happening right now) is that being a musician, or working in the music industry will be available to more people.

AI will work as an enhancer for those who are interested in becoming artists but decided to take a different approach to it.

I recently went to a concert that blew my mind.

The artist was C. Tangana, a Spanish rapper, that completely accepts that he can’t sing nor sing in tune (the tour is called something like that) but is an amazing songwriter.

And he uses whatever tools there are available to him to make great songs, that many people like, and that has allowed him to hire dozens of top-tier musicians to support him on stage.

Not only musicians but actors too.

Something like that, I believe wouldn’t have been possible even a decade ago, when the software was still not that good.

And this is just a case in hundreds of thousands.

You can also think of the increased demand for modern music-making tools driving in turn the demand for musicians that can also code, or sell stuff.

Probably, the most at risk of losing their jobs to a computer are those low-effort beatmakers that don’t add a lot of value to their work.

However, in every other case, I really believe that if you learn how to embrace modernity, or just understand how it works, most musicians will be better off in an AI-driven market."