"For a while there, house concerts were a trendy idea for independent artists that caught on pretty quickly. Intimate living room shows for hipsters and folk artists popped up all over the country (and world) and became a preferred alternative to the traditional weekend show. But now house concerts are actually becoming the primary means for many artists to make their living.

+Why You Should Be Doing House Shows

While there are a bunch of different websites out there for getting into the house concert circuit, the truth is you don’t need them. Many of those sites require membership and many of their house concert hosts are backlogged with a wishlist of performers they want to be part of their series. And a lot of those homes are only doing a few shows each year.

But honestly, booking house concerts is not that hard. If you are actively playing out and growing your fanbase, you have everything you need to book quality house concerts. You don’t need to subscribe to Concerts In Your Home or any of those other networks. Here are 5 ways that I’ve generate solid house concert leads.

Uggggh! I’ll keep saying it until you listen. 99% of your house concerts will come from people who already know you and have heard you perform live. If you pass your newsletter around during your set, you already have a source to work from. Get home after the show. Send an email welcoming new subscribers to the newsletter. Include a short paragraph at the end inviting people to consider hosting you for a house concert. You may not get a taker, but you will get them thinking about it.

+Will People Really Join My Newsletter If I Give Them A Free Song?

2. Explain What A House Concert Is

This might sound stupid and unnecessary, but you need to explain what a house concert is. Some people have never been to one and have no idea what you’re even talking about when you say the words “house concert”. And people DO NOT like to step into unknown territory unless they know what they’re getting into. Sme people have been to a house concert, but have no idea how to host their own. Break it down. Spell it out. One of the most frequented pages on my website is What Exactly Is A House Concert? (if you borrow any content from this link, please credit me with a link back to www.joyike.com). I stick it in my welcome newsletter (for new subscribers) and in my monthly e-blast. I send it to anyone who tells me they’re considering hosting one. I send it to people who ask me questions that I’ve already answered on this page. This page comes in handy a lot.

First off: don’t overdo it. But you need to drop occasional notes about house concerts on your Facebook, Twitter, and Instagram. Tell people you’re coming through their region and are filling open holes. If you’re not posting about house concert booking on your social media, you’re not using your most powerful marketing tool (second to your newsletter, of course).

4. Never Underestimate the power of Suggestions.

Which brings me to the next point: NEVER underestimate the power of suggestion. Often people don’t want to book you for a living room show because they’re not thinking about it. It's the last thing on their mind. Just mention it. Don’t mention it every day, but mention it enough. Mention it on stage for goodness sakes! Give people ideas: A house concert can be a winter party, a summer barbecue, a birthday gift for a friend, a girls night in, a church social event. The ideas are endless and when you can get people to think of house concerts in that way, you’ll be more likely to get some booked.

Do it! Spend $75 to print some 4×6 handbills (front and back). Put them out on your merch table. This is the 3rd most effective thing I’ve done to generate house concerts. When your show attendee takes a handbill off the table, it usually means they want to sit on the idea and/or talk it over with their spouse or roommates. Handbills are a great visual reminder and give you the ability to explain what it looks like to host a house concert. It’s like the physical, tangible version of the above link. Here’s what mine looks like (front and back)… 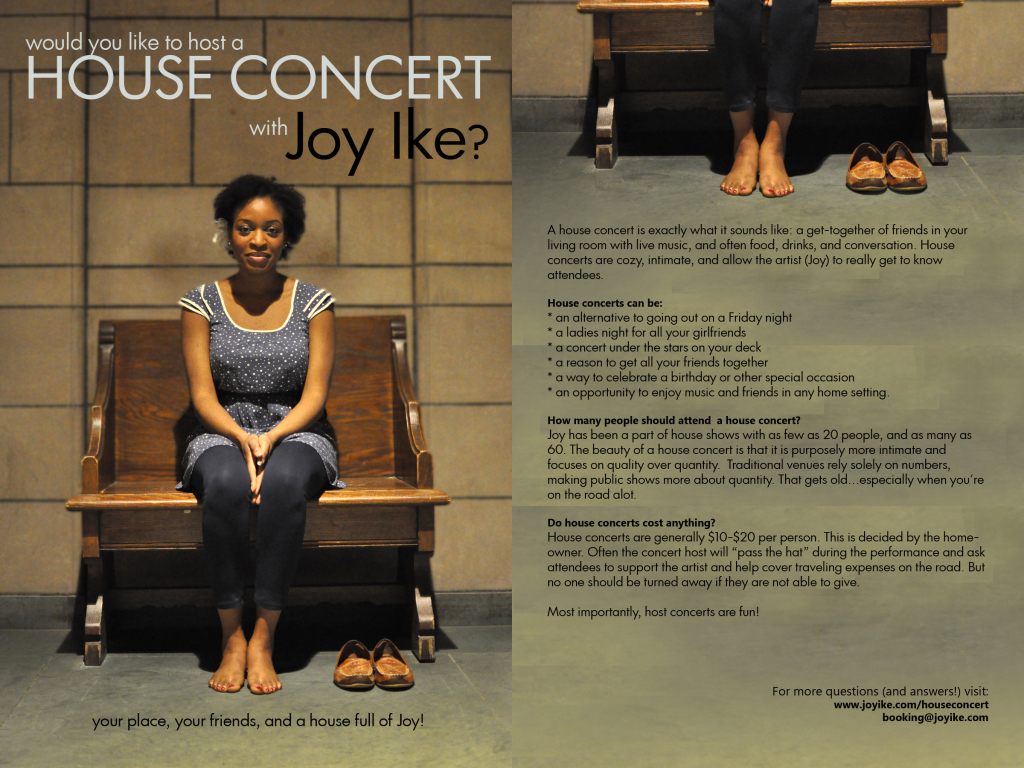 REMEMBER: your fans are your greatest asset. They already love your music. Use that to your advantage and find the ones that want to share you with their community of friends.

How do you generate house concert leads? Do you have any cool or unconventional methods that have worked?" Please leave thoughts/ideas in the comments below.

+How to Get From "Local Artist" to "Touring Musician"

+Shows: Which Ones to Play, When to Play Them, and Why