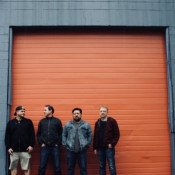 AIMING TO PUT THE DANGER BACK IN ROCK N’ ROLL SEATTLE’S SUNDODGER AMPS UP FOR SOME ‘BIGGER WAVES’ ON THEIR HIGH-POWERED FULL LENGTH DEBUT Dan Engel, multi-talented frontman and guitarist for emerging Seattle powerhouse band Sundodger, says the easiest thing for him, band co-founder Jeff Norman (guitar) and their groove intensive rhythm section (bassist Don Currie, drummer Mark Fiebig) to do would be to write music that fits in nicely into the mainstream rock we’re hearing today. “But nobody would stomach that,” Engel adds. “Music today is very safe, no pointy edges, and would go very nicely on a mobile phone or Corona commercial. We would love to see a little danger put back into rock n roll.” Taking raucous and lyrically provocative action in that direction, Sundodger creates intense AOR rock for our era, fusing classic guitar rock edged with punk and new wave on their full length debut Bigger Waves. Released both on vinyl (the ultimate reflection of its classic rock roots) and digitally, the compelling 10 track collection was recorded at Studio Litho with the help of producer/engineer Shawn Simmons, who has been behind the boards for Northwest heavyweights like Head and the Heart, My Goodness and Lemelo. The tracks were mastered in Seattle by Ed Brooks (Resonant Mastering); lacquer was cut by Levi Seitz (Black Belt Mastering). Though Bigger Waves is the band’s full length debut with Sundodger’s current lineup, it is technically a follow-up to the band’s 2014 EP Home, which featured Engel on drums and rhythm guitar, Norman on lead guitar and a guest overdubbing the bass parts. As such, Bigger Waves reflects their exciting evolution and the natural chemistry that happens when a developing band hits its stride with the right lineup. Currie and Fiebig, who joined in 2016, have known each other since high school and were previously in a Seattle group called Betty Ford Falcons. “We really took our time with Bigger Waves, a year and a half from end to end,” he adds. “We are a much closer band after going through that process. We had all the blowout fights and stuff like that and got through it – all of which has made us better musicians and people. Sonically, we did a lot of experimenting with guitar tones, vocals and for the first time brought keyboards into the mix. The result is a cohesive collection of song that will take listeners on a journey, rather than just a list of disparate tracks.” That fascinating trip deals in depth with relationships and working through the difficulties that are always part of them – with offbeat, sometimes non-linear, Cobain-esque lyrics that can be unlocked from different angles. “Banner Days” is a high energy, autobiographical reflection on the ups and downs Engel and his wife have gone through over the years, financially and emotionally, and how that’s made them stronger. “Like Me”, whose cool dynamic includes hypnotic keyboard elements, is Engel’s favorite tune, a tale of two flawed individuals who break out of their individual isolations when they find each other. “Echoes” and “Epitaph” coincidentally dovetail thematically into each other. Both invoke the dual realities of reliance and isolation in our device dependent world. “Echoes” tackles the irony of being able to do so much but not really accomplishing anything with those capabilities, while “Epitaph” is a more hard-hitting, destructive result of making online connections that seem more real than they actually are. The roots of Sundodger extend back to the 90s, when Engel and Norman formed the band Divided Sky after they met in college. With Engel on drums, the band released two CDs and toured around the Pacific Northwest. Years after a mutual burnout found the two pursuing music related career endeavors apart from the band grind, they reunited as Divided Sky for a few shows and rekindled the old creative spark and decided to write new material (with Engel on vocals and guitar) - which led to the formation of Sundodger. “I think the style of music we play comes from us just having been musicians for a long time and understanding the only thing that will really resonant with a listener is if the art you create is honest,” Engel says. “And we all listen to different genres and are influenced as such. The common string throughout the bands we love is that those bands did what they wanted with their art. Especially punk rock. That DIY and F you I'm going to do what I want has always been thrilling for me.”