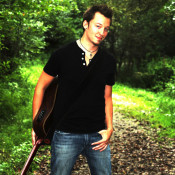 Unleaded rhythmic alt-pop fuels singer/songwriter and two-wheel troubadour Michael McFarland’s engine. Garnering comparisons ranging from modern rock groups such as Matchbox 20 & The Fray to classic singer-songwriters such as Paul Simon & Elton John, the Asheville, NC based performer mixes an intensity with a sensitivity wrapped in effective contradictions. Astride his motorcycle with a guitar strapped to his back, making references to quantum mechanics or science fiction, McFarland embraces and explores his wide spectrum of knowledge, interests, experiences, and hobbies in his music and writing. Michael McFarland in the simplest summary? Writer, Rocker, Biker, Geek. The self-deprecating humorist, who makes a solo intimate acoustic performance with just his voice and a guitar sound like an arena show with all the volume, the lights, and the smoke, McFarland entertains the smallest crowds on the largest scale. Raised in Kent, Ohio (where students get shot and rivers catch on fire), McFarland is a self-professed “proud kindergarten dropout” after escaping the public school system to be home schooled. Coming from a family of scientists with his father being a nuclear physicist and mother a former biologist, Michael grew up strongly embracing the arts and the sciences in a simultaneous harmony that allowed him to thrive. McFarland believes that his fondness of motorcycles may be a genetic condition: his branch of Clan MacFarlane was run out of Scotland in 1805 for being horse thieves. When it comes to saddling up, however, McFarland prefers two wheels to four legs. “Motorcycles are easier to keep fed,” he says. “And much more pleasant to clean up after.” Michael McFarland spent much of his twenties playing in rock bands and developing his skills as a songwriter, performer, producer, and engineer. His first solo album was all Michael. From every instrument played, to the writing, production, engineering, mixing, and mastering, McFarland clearly reinforced the definition of the DIY album. From touring across America on the back of a motorcycle, to reflecting and inserting the experiences of his life, loves found, loves lost, and his childhood, Michael McFarland sings his heartfelt autobiographical songs, accompanied by only an acoustic guitar, a loop pedal, and a motorcycle waiting outside to bring him to the next show.