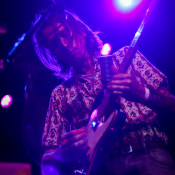 Dubbed “classic rock’s piercingly bright diamond in the rough” (BandsInTown News), San Francisco poet, composer, and guitarist Luke Sweeney picks up a variety of stylings from forebearers such as Marc Bolan, Al Green, and Stephen Malkmus like pieces of pavement bubblegum to build a bridge into new, unforged territories of psychedelic pop. This journey is sustained by a palpable substance in the hapless escape artists, hopeless romantics, and enduring spiritual images he embraces and celebrates along the way. In 2013, Sweeney branched out from previous outfits to release his own material, resulting thus far in two critically acclaimed albums. His self-released debut ‘Ether Ore’ gained praises for its “distinctly handcrafted feel” and “melodies that feel like opiates for the soul” (SF Chronicle), while his studio follow-up ‘Adventure:Us’(Aerobic International) expanded into “far-reaching pop, psychedelic, and classic-rock realms with humor and irreverence—both calling cards of Sweeney's songwriting,” and was considered “one of the best albums released” in 2014 (Portland Mercury). A “pillar of San Francisco's garage-psych community” (TheBayBridged), Sweeney has played alongside a wide range of touring peers, including Eleanor Friedberger, Jessica Pratt, Morgan Delt, Night Moves, Part Time, Pearl Charles, Perling Hiss, and Sugar Candy Mountain, to name a few. Sweeney also lends a hand to the live exploits of many cohorts, among them Tim Cohen and Healing Potpourri. Meanwhile, he’s kept his pen sharp, his notebook handy, and the microphone on standby. Among the recent recordings due to surface in the near future is a long player follow-up to ‘Adventure:Us’ with producer Robin MacMillan and Sweeney’s band of accomplished players. For those who let their rock-n-roll muse take the wheel in travels of the heart, it’s tempting to believe the road being paved ahead could be as thrilling and beautiful as anything we’ve heard before. - Hank Earring, Eagle Rock CA. 2018