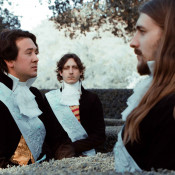 Saturated in complex harmonies and intelligent chord progressions alike, the music of King Washington is a throwback to when rock n' roll was a songwriter's game, consistently being praised for, "bringing a return to true songwriting" (Rapt Magazine). Combining the vocal styles and songwriting ethos of classic writers of yore, with the angst and adventure of growing up in 1990's Los Angeles, King Washington's music lives amongst the precious realm of fully unexpected yet somehow familiar rock n' roll. King Washington was born in late 2005 by a then eighteen-year old Tyson Kelly, son of pop songwriting legend and Hall of Fame member Tom Kelly. The band sprouted and became a Los Angeles indie music scene staple in mid-2009 (with the additions of George Krikes, and Billy Lee). Since then the band has charged the LA music scene with the release of their debut LP, The Gears, on June 5th, 2012. The story of the creation of The Gears is a trying one, filled with record label feuds and a year and a half of cross-country flights to record, arduous recording contract negotiating and in the end an album that was unable to be finished, nor released by the label, forcing KW back to square one. The band immediately decided to initiate a Kickstarter campaign and, with the help of their fans, were able to fund the entire re-recording of The Gears. The Gears LP was recorded over a twelve-day, finger-blistering stint at the Exchange Studios in Milwaukee, WI in late summer 2011. Produced by Ambrosia's Joe Puerta, the album has quickly become acclaimed by critics and fans alike. "In an ideal world, King Washington would be topping the charts with The Gears. Highly melodic and intellectual without isolating the listener." (7BitArcade.com) The album showcases a quality and range of songwriting contemporary music has not been exposed to in recent memory. The album manages to be progressive in its writing while still maintaining a pop sensibility the average listener can grasp. The result is a fan-base and demographic as broad as the spectrum allows, while maintaining the envied respect of musicians and critics alike. Shortly after the Gears was released the band took a six month hiatus, not sure of what the future held. But with an entire new record under their belts, they decided to give it another whirl and booked time their favorite studio "The Exchange" in Milwaukee. They knocked out tracking instruments in ten days and headed back to LA to finish vocals, this time working with long time friend Alex Pfender as mixer and producer. "The Overload" dropped in August of 2013 and received much praise. "…King Washington are back with their second offering, an album that is sure to make your ears perk up with excitement. From the layered harmonies that weave amongst melodies that soothe and excite with equal measure, The Overload welcomes you in like and old friend." - Room Thirteen King Washington is currently in the works of writing their third release and has been touring the nation heavily this year opening for artists such as Crash Kings, Michael McDonald, Ambrosia, Peter Asher, The Georgia Satellites, Denny Laine and Arctic Monkeys. They are moving to NYC in August for a residency at Rockwood Music Hall. Check the "Shows" page for upcoming performances near you.