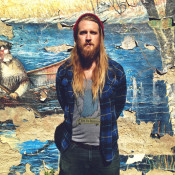 Joshua Powell is an artist from Indianapolis, IN, who handcrafts a strangely literate brand of psychedelic indie rock that manages to be simultaneously socially conscious and spiritually turbulent. With over 900 shows in over 40 states under his anachronistic studded belt, Powell blends the narrative richness of American folk with a heavy dose of hallucinatory swirl and a ghost note of ‘00s-vintage bedroom indie, all highlighted in ethereal falsetto by his purposeful, kaleidoscopic poetry. In 2017, Spotify has featured songs from his record Alyosha on their official "Indie Acoustic" and "Writer's Playlist." Joshua also had songs placed in Freeform's "The Fosters," ABC's "Blood and Oil," and in regular rotation on Starbucks' official national store playlist. The band has recorded sessions with Audiotree and Daytrotter, and been covered in the Huffington Post and No Depression which described Powell’s music as, “a crossroads of revival-in-the-river folk mysticism and barroom-ready guitar-driven rock with conscience and existential wonder.” Joshua and the band have performed at Mile of Music (WI), Nebraska Folk and Roots Festival (NE), Midpoint Music Fest (OH), Starry Night (IN), Virginia Ave Music Fest (IN), Lincoln Calling (NE), and Whiskey War Fest (MO) on bills alongside Shawn James, The Crane Wives, The Cactus Blossoms, Mike Mains, Desert Noises, Lydia Loveless, San Fermin, and Diane Coffee.