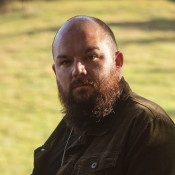 Josh Merritt - Reynolds Station Authenticity can’t be faked. So when an artist hails from the heartland and shares stories drawn from personal experience, the music resonates in ways that genuinely express their passion and purpose. Josh Merritt is one of those artists.  A native of Owensboro, Kentucky, he inherited the grit and honesty so essential to heartland culture. Having spent the better part of the past decade honing his chops on the Southern tour circuit, Merritt slides effortlessly into his own on debut studio release Reynolds Station, a stirring collection of autobiographical songs that recount his tumultuous childhood in the clutches of rural America’s amphetamine epidemic. A countrified concept album, it’s a grim testament to the tragedy that has upended so many lives and led to the loss of both faith and fortitude. Taken from his young mother as she struggled with drug addiction and raised by his grandparents, Merritt experienced the effects of substance abuse at close range.  “I’m not necessarily trying to impart any big lesson here,” Merritt says, “I’m just trying to tell people about what I’ve experienced, to share this album with people who have gone through the same thing so maybe they’ll be able to relate and find a connection to their own experience.”  Despite Reynolds Station being Merritt’s first formal outing, the 30 year-old singer and songwriter possesses a knowing intellect, an assured delivery and a confidence and clarity borne of experience that allow these songs to resonate. The influence of his home state’s rich musical tradition is apparent in his impassioned vocal delivery, and the music feels at once emotionally raw and commercially accessible. Songs such as “The High,” “How Many Times,” “Run” and “Not a Life to Save” highlight the longing and despair of Merritt’s coming of age in Kentucky, all of them shot through with a satisfyingly dowhome resolve.   Produced by hit songwriter and recording artist Shannon Lawson, and engineered and mixed by Zac Kasik (who worked with Jamey Johnson on platinum-selling album That Lonesome Song), Reynolds Station features veteran session players such as bassist Robert Kerns (Sheryl Crow), drummer Shakey Fowles (Kid Rock) and keyboard player Peter Keys (Lynyrd Skynyrd). Merritt had previously recorded 2016 concert album, Live at Songhouse, to use as his calling card, but he was eager to have Lawson oversee his debut studio effort, citing Lawson’s skills and expertise as the driving force that saw the record through to fruition. Merritt does more than appreciate the insight Lawson brought to the project; he also credits Lawson with allowing the record to evolve at its own pace. “He never rushed things in the studio,” Merritt recalls. “There’s something to be said for taking the time to do things right.” Though Reynolds Station is his first studio album, Merritt already has plenty of hard-won experience under his belt, having opened shows for Hank Williams Jr., Charlie Daniels Band, LoCash Cowboys, Colt Ford, Corey Smith, Trent Tomlinson and Sonia Leigh. He was initially inspired to make music by his father, the middle child of 14, who cut his teeth playing bluegrass in the family band. That same enthusiasm for music rubbed off on Merritt when he was still a youngster, and he soon found his way down the path to a set of influences that includes Jason Isbell, Todd Snider, New Grass Revival, The Eagles, John Moreland and John Anderson. Though there were many obstacles along the way. Merritt was immersed in a volatile scene that easily could have derailed his ambitions. “Most of the people I knew and hung out with growing up were raised in families where drugs were the predominant factor,” Merritt says. “I did my share of experimenting along the way, but I was always looking for a way to escape that predicament. I’ve been sober for a year and a half now, so I wanted to bring light to this situation, and maybe give others some hope that things can turn out ok.” Of the songs Merritt wrote for Reynolds Station, the ones that convey a sense of affirmation are the ones that mean the most to him. “My hope for this record is that it connects in some way with people who are still searching for that light,”  he says. “If I accomplish that, I’ll know for sure that I’ve succeeded.”