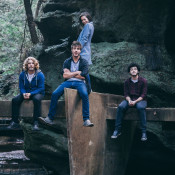 Freak Mythology was formed in 2012 as a psychedelic and funk rock experiment in Cincinnati, Ohio. Their debut self-titled album was released in April of 2017, landing them spots at music festivals (Hippie Fest in Athens, Ohio), song placement of their single “Headed Out” in a French short film, an Album of the Year Award 2017 by UK Rock blog “Pete’s Rock News and Views”, features in The Jamwich Magazine, and numerous large local shows in Cincinnati. Their singles from the first album 'Wake Up', 'Haunting Me’, and ‘House Arrest’ have made it onto numerous college radio stations across the U.S. as well as local stations in Cincinnati. In August of 2017, Freak Mythology placed 1st in the Cincinnati’s Next Big Band Competition, winning a cash prize as well as studio time in one of Cincinnati’s top studios, where they are currently in the process of recording their 2nd album. During this same period, they played heavily in the Cincinnati music scene, opening up for some of the top local acts and making a name for themselves with their tight knit and loyal fanbase. Press and Reviews of Freak Mythology: "Discovering Freak Mythology, a four piece from Cincinnati, is a refreshing breath of Americana-embedded alternative rock and roll." — Charles Frank - The Jamwich Magazine "That’s the great thing about what I do, every once in a while you get to hear that band that just ‘clicks’. Freak Mythology clicks." — Pete Divine - Pete's Rock News and Views “Truly stunning varied selection - current and original yet so evocative of years gone by - a true pleasure to have heard it” - Donald Strachen Brad Wehlitz - Lead Vocals, Guitar Ryan Shephard - Vocals, Guitar Caroline Joseph - Vocals, Bass Travis Hanna - Percussion