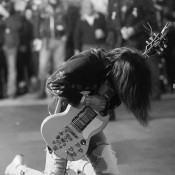 ♥ OFFICIAL SITES ♥ Facebook.com/vanessasilbermanofficial (Vanessa Facebook) Facebook.com/dufmusic (Diamonds Under Fire) Facebook.com/Adiamondheartproduction (Label) ♥ VANESSA SILBERMAN ♥ CAREER HIGHLIGHTS: *********************************************************** Vanessa Silberman is a Los Angeles based Singer, Guitarist, Songwriter and founding member of the band Diamonds Under Fire. She also is an independent A&R, Record Producer / Engineer, Graphic Artist, Entrepreneur and has a Artist Development Label called A Diamond Heart Production. Her band Diamonds Under Fire has been around for well over a decade and self-released numerous EPs, toured the US 10 times – also playing Canada, the UK, SXSW & SSMF. Locally the band has made its mark on all the known venues including The El Rey, The Troubadour, Viper Room, The Echo and Bootleg Theatre. They have shared the stage with Meg Myers, Dead Sara, LP (98.7FM’s ‘Close to Home’), Butterfly Boucher, Brian Glaze (Brian Jonestown Massacre) and many others. The band has been featured on 4 Vans ‘Off The Wall’ Compilations, in Guitar Player Magazine with a cover call out as well as had features on NPR.com, Buzzbands.la, LARecord.com, LAWeekly.com, regular spins on commercial and non-com radio (including KWSS 93.9FM AZ), and was featured on Time Warner's 'SoCal Beat'. Vanessa's live shows & music has often been compared to the raw bare bones rock 'n roll of Nirvana, The Ramones, Joan Jett, & Chrissie Hynde with the danciness of No Doubt & the pop sensibilities of Pink. Vanessa released her first solo single 'Think Tank (feat. Derek Jordan)' July 21st 2015. ♥ WHAT PEOPLE HAVE SAID ABOUT VANESSA / DIAMONDS UNDER FIRE ♥ "a true one-woman-one-guitar, I-do-everything-myself musical entrepreneur." - Redefine Magazine "Vanessa has managed to make music nostalgic of 90’s era grunge, worthy of a 21st century platform." - Simplenvrmt.com "Grunge-chic"- Freeindie.com "In a music world full of female pop artists hitting it big by chewing bubblegum and puking in closets, Vanessa is doing the opposite. Harnessing a sound that brings back memories of No Doubt and Nirvana, Diamonds Under Fire strikes not only a chord of nostalgia, but the “damn that’s a good tune” chord as well."- Theburningear.com "Diamonds Under Fire was more climactic than it should have been. Silberman broke from the norm. In a music scene full of pretty, glamorous female musicians, Silberman provided an aesthetic more akin to Joey Ramone and a musical sound reminiscent of ’90s rock with static guitar and angsty vocals."- Dailynexus.com