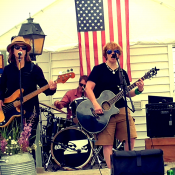 WENDY CLARK Denver, Colorado Colorado-based Retro-futuristic New Wave Rock and Roll.. The Wendy Clark Band is a Colorado-based original Americana retro-futuristic new wave rock band The band is made up of Wendy Clark (guitar, vocals, songwriting), Chris Coward (bass, vocals), and Andy Sweetser (drums). http://wendyclarkmusic.com Indie / Roots Rock / Rock / Blues / Powerpop / Western Rock / Americana / Reggae / Alt-Country / Swing ​ The Wendy Clark Band or WCB (2011–present) is a Denver-based original rock band that has evolved from Tequila Mockingbird (1996–2011). The duo ¡DOS LOCOS! is side project of WCB featuring Wendy Clark and bassist Chris Coward. Wendy Clark is the band leader of The Wendy Clark Band and was the founder of Denver-based original rock band Tequila Mockingbird. Active on the Front Range music circuit and indie scene since 1996, Wendy is a writer, composer, guitarist, bandleader, recording artist, manager, and promoter. Her music is classified as Americana rock, and plays to non-specific genre consistently, the execution of each song - although the melody and playful lyrics combined with Clark's serving of infectious melody and sarcastic and thoughtful philosophical meanderings and with a twinge of nostalgia, that are catchy, powerful, and kept fresh by delving into multiple genres. Wendy has released three critically-acclaimed full-length CDs under the moniker Tequila Mockingbird; she’s performed at more than 1,000 festivals and gigs regionally, including A Taste of Colorado, Adams County Fair, Alamosa 4th of July Fair, and The CHUN Peoples Fair (1997–present); she’s toured the Rockies into Wyoming and through New Mexico; appeared on live TV and radio, conducting interviews and live in-studio performances on Denver's Channel 2 Evening News (The Deuce), KRFC FM Ft. Collins 88.9 FM, KYGT FM, 1190 AM, KRUU FM Fairfield, Mile High Underground, Raven on the Rocks, KCMJ FM Colorado Springs, and Band Talk indie104.com; released dozens of videos (The Honeymoon and Catching On receiving tens of thousands of views on her YouTube); and opened at sold-out shows for bands such as Roger Clyne and the Peacemakers, The Samples, Bob Schneider, and Chris Daniels and The Kings. She’s opened up for Tim McGraw at Fiddler’s Green, sat in with The Refreshments, Hazel Miller, members of Firefall, and backed up Brian Blush (The Refreshments) and Jamon Scott (The Toluenes), as well as collaborated and recorded with bassist Rob Squires of Big Head Todd and the Monsters on UFO (1998). She’s recorded tracks with Kenny James (The Samples), Sean McIntyre, and more. She also contributes her time and talent to many area charity benefits annually, including promotions, such as the 2011 and 2012 campaigns for CD Relief for the LLS. And she worked on the campaign for Chris Daniels and Mark Oblinger (Firefall) for the 2011 Grammy Awards. Wendy has recorded with award-winning sound engineers/producers including Eric Shiveley (Alien-American 2004), Bill Thomas (UFO 1998, Luck and Trouble 2010), and multi-GRAMMY recipient, David Glasser. Wendy won Vocalist of the Year in 2009, and UFO was the fifth most popular in the Night Howler Radio Awards. Her song, Blue, has been awarded one of the top 100 songs of the year internationally by IAIRA in 2010. She has been listed in the Top 5 artists in Colorado and was in the top 50 most played singles and albums in 2010. Wendy has been working and promoting, as well as supporting the Colorado network since 1996. The band is promoted by Best 303 Songs and was recently named Band of the Week by that organization. Video for PRIME live at the Walnut Room: https://youtu.be/U4nqJXz93uI Please visit: http://wendyclarkmusic.com for more! CDBaby- http://www.cdbaby.com/Artist/TequilaMockingbird iTunes- http://itunes.apple.com/us/album/luck-and-trouble/id350734564 http://facebook.com/wendyclarkband http://www.youtube.com/wendyclark http://reverbnation.com/wendyclarkband http://reverbnation.com/wendyclark https://twitter.com/wclarkhudson https://twitter.com/tqmb https://www.instagram.com/wclarkhudson https://tequilamockingbird.bandcamp.com https://soundcloud.com/tequilamockingbirdmusic https://play.spotify.com/artist/27ee5YH6YAMfT3IOrh3L4d Contact Wendy Clark at 303-229-3155 or wclarkhudson@gmail.com WCB is ORIGINAL HIGH-ENERGY INDIE ROCK BAND BASED IN COLORADO.