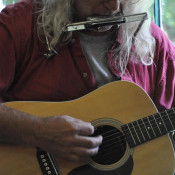 David Wiseman - da6d - Strings and reeds, which is basically, guitar and harmonica...oh, and vocals. And there&#39;s that foot stomping, but let&#39;s call that percussion. I was born in 1962, at the young age of none, in the southern Appalachian mountains near the place where rain decides to go east or west. Maybe that is what dictated my desire to wander. I have visited or lived in parts of Asia, Europe, most of America and some parts of Canada. Somewhere early in the last 50 years, I found the forces of wind and reed on a harmonica. I was amazed that so much sound could come out of such a small instrument. Not long after, I discovered six strings and wood. My guitar became such a marvel that I&#39;ve never quit learning. I have a great enthusiasm for performing, storytelling, and even stretching the truth just to see if it will snap back and resemble what I had when I started. &quot;It&#39;s all one song,&quot; said Neil Young. I couldn&#39;t agree more. My portion of that song has evolved to be the &quot;Blues, Folk, and Ballads&quot; that I perform. Some, I have written; some I share from other artists, just because the songs are so beautiful. Folk music is the people&#39;s music, manifesting every emotion, wide and deep. My musical path has been influenced by blues, jazz, bluegrass, gospel, rock, all flowing together to form a multicolored tapestry. Yarns spun, stories told, and tunes stained with life&#39;s experiences come out in soulful songs. I&#39;ll tell you truths and lies about hobos and trains, and vagabonds and wars, dying and love.