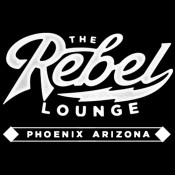 Upgrade to a Premium IOTM account to view booking info.

"Before the Rebel Lounge, it was the Mason Jar. Founded in 1979, the Mason Jar quickly established itself as one of the premier clubs in central Phoenix, hosting some of alternative rock’s best on their way to stardom: Rage Against the Machine, Tool, Jane’s Addiction, Green Day, Guns ‘N’ Roses, and Nirvana. In the early 2000s, the club was revamped and began booking diverse modern rock, indie, and metal bands, hosting The Black Keys, Fall Out Boy, Jimmy Eat World, & Avenge Sevenfold, and more." Live music up to 7 nights a week. While most shows are 21+, age requirement can vary.