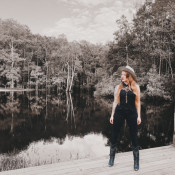 Amelia Presley is a soulful Americana Singer-Songwriter based in Texas. Originally from a farm in south Mississippi, she served 5 years active duty in the United States Coast Guard as a Machinery Technician. During her time in the military, she recorded her first full length studio album, "No Pony Ride". She scraped enough funds to afford the studio fees for the album by selling her horse and horse trailer, in addition to saving her military pay. In 2015, Presley was discharged from active duty. It was then that she pursued music full time, accomplishing a performance at the Grand Ole Opry and televised performance of "Heartbreak Hotel' by Elvis Presley on American Idol. Luke Bryan was quoted as saying, "I think Elvis would be proud". In 2017, Presley along with Nashville Star finalist, KK Bodiford, formed the Texas-Country duo, Highway Sisters. Together, they have performed on CBS and Fox morning shows, live terrestrial radio, and press outlets nationwide. Highway Sisters have performed with artists such as Stoney Larue, Bri Bagwell, Craig Campbell, Andrew Sevener, Brandon Rhyder, Cory Morrow, and many more, and continue to tour North America full time. Personal Life: Amelia Presley is a mother to two kids, a military veteran and military wife, volunteer (veterans and dog rescues), and brand model for veteran owned apparel company, Kickin' Brass.