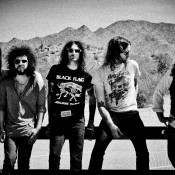 No matter where they play, when The Child take the stage they bring the noise. Their sound heralds back to early 70’s hard psych-prog (Sir Lord Baltimore, Lucifer’s Friend, Night Sun, BANG) with a modern twist of metal and doom. For those who have witnessed the band’s live set words like Led Zeppelin, Deep Purple and James Gang spring from their lips. Layering high-energy, heavy twin-guitar riffage over a pounding rhythm section with a singer that’s a cross between Robert Plant, Ronnie Dio and Blind Melon’s Shannon Hoon has built the group a passionate, dedicated and rapidly growing fanbase. Scorpion Child are from lots of different places, not only logistically but musically. “We’re from St. Louis, Austin, Wichita, and Houston,” says lead singer Aryn Jonathan Black describing the band’s roots. “Our influences are diversified as classic rock and 80’s thrash metal to old school southern delta blues along the lines of Blind Willie Johnson, Lemon Jefferson and Willie McTell.” The five-piece call Austin, Texas home since forming in the summer of 2006. The music world may be crowded, but there’s always going to be room for The Child’s frenzied freakouts and dark melodies,that flashback to the boneyard of classic rock.”