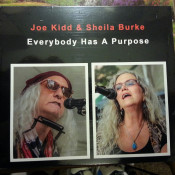 In the 3 years that Joe Kidd & Sheila Burke have been together, they have created a sound that is powerful and unique in the world of acoustic music. Influenced by 60s folk music, traditional Appalachian songs, Celtic melodies, the intensity of bluegrass, country, & gospel/christian standards, Classical atmospheres, African & Middle Eastern rhythms, and Native American prayer chants, Joe & Sheila incorporate guitars, autoharp, African djembe drum, Native American sacred drum, and many other diverse instruments from around the world to provide their original and uplifting music. They write socially conscious & spiritual songs of struggle, thanksgiving, redemption, and love. Their descriptions, interpretations & translations (sung in many different languages) are mystic and revelatory. Both are published poets/writers which gives their concerts the added power of the presence of the spoken word. This international duo have recently toured New York, Pennsylvania, Ohio, West Virginia, Tennessee, Virginia, Kentucky, Indiana, North Carolina, South Carolina, Florida, and Ontario Canada while still remaining active in Michigan performing concerts at countless festivals, churches, powwows, television & radio shows, benefits, and venues across the state. Along with this activity, in April 2013 they received their 1st prestigious Detroit Music Award for Outstanding World Music Songwriters of the Year and again in April 2014 they received the award for the 2nd straight year in a row. 2015 brought them 3 more nominations in the Gospel/Christian Artist, Vocalists and Songwriters Of The Year categories. Sheila has been nominated as the Review Magazine Country Music Female Vocalist Of The Year. Joe Kidd's former band 'The White Lines' are currently nominated to be inducted into the Michigan Rock & Roll Hall Of Fame. As well as being asked to appear at the great World Music Festival - Concert Of Colors with a roster of artists that included Don Was and musicians from around the planet, where they also received while onstage, the Michigan Governor's Award for Artistic Excellence and for their efforts to promote peace, social justice and diversity among all cultures, July 2015 brought Joe & Sheila their 1st Global Music Award in the Folk category in recognition of their original song 'Soldiers In the Army Of Mercy & Peace'. Their premier CD titled 'Everybody Has A Purpose' has been remixed in Burbank Ca. at Mad Dog Studios by Dusty Wakeman, and has been Mastered by Peter Doell at Universal Studios in Los Angeles Ca. It was released globally on Tuesday September 29, 2015 and is available on ITunes, Amazon, Spotify, CD Baby, and many other world outlets. With song titles like 'Soldiers In The Army Of Mercy & Peace' and 'The Veterans Song' and the title track, it is an offering that touches the heart, mind & soul of humanity. Wherever Joe & Sheila appear, their soaring harmonies and beautiful melodies shine a brilliant and unforgettable light upon their enthusiastic audiences. JKSB MEDIA, LLC