26 Things to Do Before You Release Your Song or Album

**Guest post written by Ari Herstand. This is an excerpt from his book How to Make It in the New Music Business (second edition). This post was originally published on Music Connection.

"Before you release your next single or album, make sure you set it up for the best chance of success. Don’t forget to do these 26 things before the release..."

**Guest post by Randy Chertkow and Jason Feehan of MakingMoneyWithMusic.com. Reprinted with permission.

"YouTube is essential for getting your music discovered and heard. But to make money from your channel's advertising, you need 1000 subscribers and 4000 watch hours. In this three part series, we'll give you the techniques you can use to hit this threshold so YouTube starts sending you checks for the ads running on your channel and videos."

Music Business After Dark Ep. 2: How Do I Get Opening Slots on Tours?

"Episode 2 of Music Business After Dark, a series of informative vlogs by music industry veteran and educator Jeff Lysyczyn."

**Guest post by Eki Shola, a musician and physician that creates a healing and transformative space for the listener through sharing her lush, jazzy-soul, live electronica vibes.

"We all do it but I’m not sure if we openly talk about it. Instead, what I’ve observed are a range of reactions - some subtle and others not. I’ll chat about two different scenarios but in reality, I think we all fit on a spectrum, save for the bands that appear to play completely perfect and are tight all that time (but I guarantee they did not start that way)..."

Is It Worth Playing Open Mic Nights?

"Any stage can be a platform for you to propel yourself into the musical stratosphere, and, in your capacity as an intrepid and curious musician, you will always find people worth talking to at such events [open mics]. And, at any rate, you only get as involved as you want to..." View Full Article

A release strategy to fill your yearly calendar

**This post originally appeared on the Disc Makers Blog for indie musicians by Randy Chertkow & Jason Feehan of MakingMoneyWithMusic.com. Reprinted with permission.

"Your best social media strategy is to entertain your fans throughout the year rather than just drop an album and disappear. Create a strategy to make your fans anticipate your every release — music, videos, merch, and more — and attract new fans in the process."

Music Business After Dark Ep 1: Why is it So Hard to Get a Good Manager?

"The first episode of Music Business After Dark, a series of informative vlogs by music industry veteran and educator Jeff Lysyczyn."

You're On Your Own

**Guest post by Bob Lefsetz of The Lefsetz Letter.

"Don't wait for help, do it yourself. Just like you can record and distribute yourself, you can promote too. If you're waiting for a manager to start, don't...Decide who you want to be. A hobbyist, a touring musician or a superstar. This affects your path..."

Making a Living as an Independent Artist

**Guest post written by Jake Shane, an American singer-songwriter and guitarist who resides in Spain. He makes his living as an independent artist by touring around Europe. His fourth album will be released in October, 2019.

"A recent article by Larry Fitzmaurice titled “17 Indie Artists on Their Oddest Odd Jobs That Pay the Bills When Music Doesn’t” is by turns comforting and deflating to the indie musician...Contrastingly to me, none of those artists makes their living exclusively from music, and many of them actually lose money touring. So, what does this mean for musicians in general, and me specifically? Well, a variety of things, but I’ll limit myself to three important factors..."

Ways to Impress Music Journalists With Your Promo Photo

"Let’s face it - a promo photo is an extremely powerful part of music, with its ability to catch the attention of fans, bookers, music journalists, and the industry in general. However, while the capabilities of a promo photo can’t be overstated, it all depends on the amount of care you exert into its production. To be honest, your promo photo is just as capable of effectively telling your story as your music, but that’s only if you get it right..."

**Guest post written by Wade Sutton of Rocket to the Stars Artist Services.

"A few weeks ago it occurred to me that I had recently seen multiple posts on Facebook from artists and songwriters asking for information on how to “jailbreak” devices like the Amazon Firestick and the Google Chromecast...Jailbreaking those devices allows users to download applications so they can watch pirated content like movies currently in theaters. I had a big problem with this..."

THIS IS YOUR MOTHER SPEAKING! - Part 3

"Bad mental health robs us of enjoying our lives or caring about what we’re eating and drinking. Bad mental health can also cause disease and makes us feel worse all over. So, I’d really like you to work on all of the health tips I mentioned, including this one! After all, your mind runs the whole show!"

THIS IS YOUR MOTHER SPEAKING! - Part 2

"No one likes a hypocrite, and I want to feel great as well. I’ve been having the lemon and salt water in the mornings and more fruits and veggies. That leads us to the second most important change you can make to think and feel your best...EAT WELL."

THIS IS YOUR MOTHER SPEAKING! - Part 1

"Even when you’re a rock god, your mental and physical health can go either way. We all need a little help sometimes. So, I’m going to share the Top Three valuable and doable actions that will help you think and feel your best while you’re on the road, playing a gig, practicing in your room or just watching your favorite band. If you don’t take care of your body and mind, you won’t be able to think, write, perform or live well."

"Spotify is drawing heat from artists and music execs for an ad campaign that urges listeners to "dance like nobody's paying," a pitch for its free 30-day Spotify Premium trial..."

16 Types of Shows We've Played on the Road

"8 months ago, me and my partner/percussionist Ken quit our day jobs, sold our stuff, and hit the road in a used 30-foot Winnebago to play as many shows as possible...Here are 16 types of shows we’ve played. Remember, my experience will be different from yours."

4 ways musicians can use an EPK

"An electronic press kit (EPK) is essential for making a strong first impression on promoters, bookers, media, and other music industry professionals...You can use your EPK to help you get more press, more gigs, and come across as a serious artist."

Getting Dropped from a Record Label: What It's Like and 4 Ways to Avoid It

**Guest post written by Nick Cesarz, drummer, producer, and blogger from Milwaukee, WI. Nick is the editor and owner of DrummingReview.com, a website dedicated to helping drummers choose gear, learn how to play, and guide them through the music industry.

"It's a phone call conversation I wouldn't wish on any of my enemies: getting dropped from a record label. Being let go from a record company is a sad tale that many acts endure throughout their careers. Today I'll explain what it's like and how you can reduce your chances of having this unfortunate conversation."

"The main graphics banners on social media is one thing that we need to get correct to make a big impact [on social media]. The only problem is that each platform has their own way of displaying these graphics...Let’s start with sizes for each platform."

"After spending 3 years and 4000km away from home, I wanted to move back to my hometown. I left my mountainous college town knowing that all my musical connections would be very far, yet it was what I needed to do for my personal growth. Trying to keep a ‘band’ together at a distance has been challenging in ways I didn’t suspect, while other difficulties I had predicted never happened."

Find Your Fans: Using Data to Analyze Your Audience

"In this digital age of music streaming and social media, it is easier than ever to objectively measure an artist’s reach and influence. Whether you like it or not, every social media site and music streaming platform is collecting loads of data about their users. This information can be used to your advantage to draw powerful insights about your audience."

What to Include in an Email to a Talent Buyer

"As a Talent Buyer...I only book via email. Emails are a traceable record of who said what and the details of the agreement. Sometimes I can even tell if I want to book the band just by how well or poorly the email is formatted. So what to include or exclude in your email? There are certain things I want to see and other things I don’t want to see..."

"The demise of PledgeMusic and the hundreds of musicians left in its wake are a sadly familiar story for music industry veteran Dave Cool of Bandzoogle. "The company takes on millions in investment to support rapid growth," writes Cool. "Flashy headlines ensue." But when things fall apart, too often it's the unsuspecting musicians that suffer." 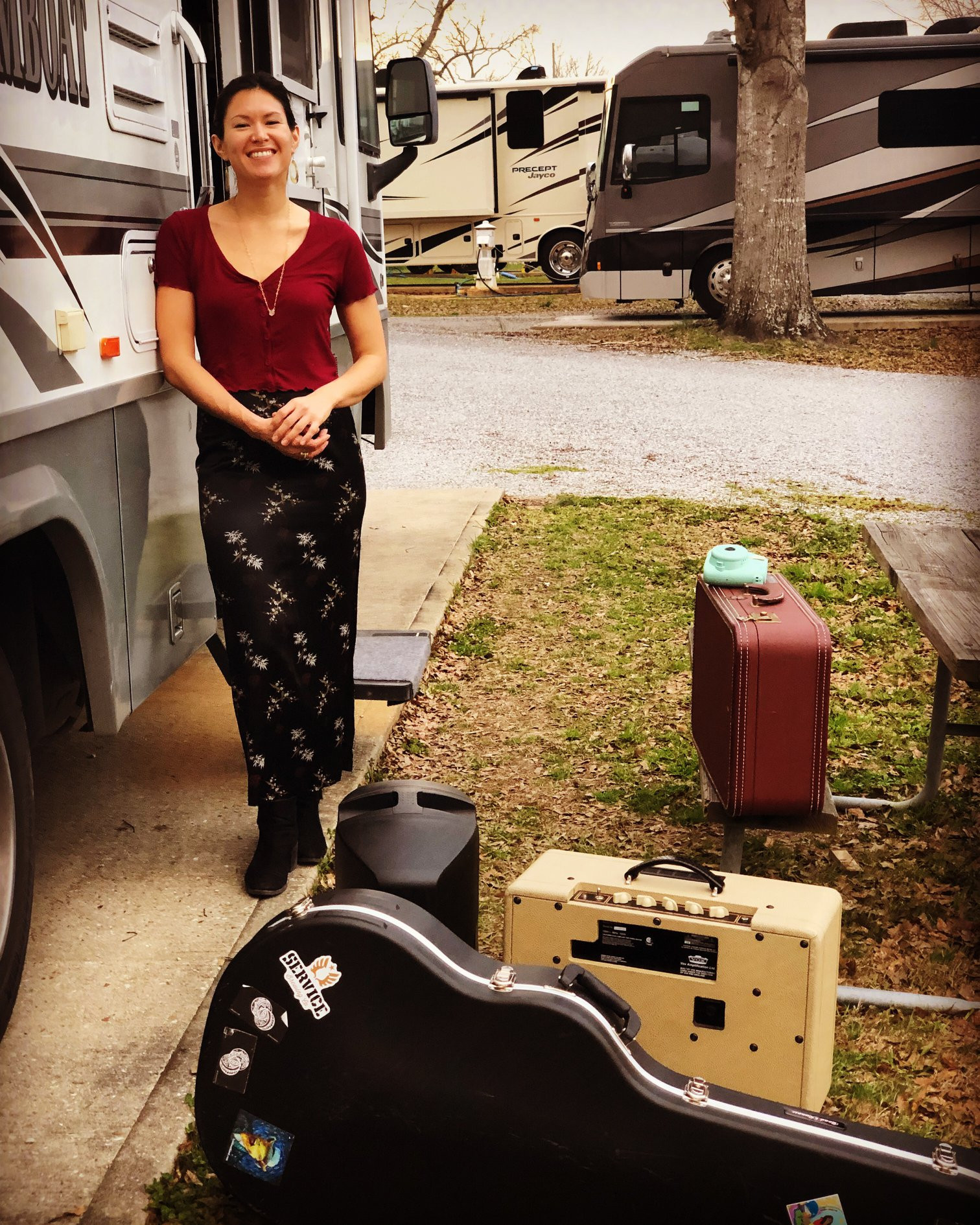 "200 days ago, my partner Ken and I left our home base in Oakland, CA to spend one year full-time RVing and playing as many shows as we can to build an audience, learn about the industry, and hopefully earn enough money to survive...the following 10 Things I’ve Learned are more focused towards DIY Musicians like myself..."

Essential Elements of an Effective EPK

**Guest post written by Dave Cool, an excerpt from Bandzoogle’s free online guide "How to make a website for your music".

"If you’re actively promoting a new album or looking to book more gigs, you’ll need to have a specific EPK or Press Kit section on your website to centralize information for media and bookers. With an EPK page, they can quickly find all the details they need. So here are the essential elements to include in your EPK..."